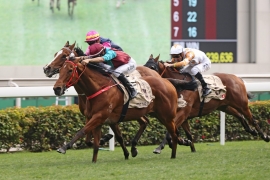 It was a case of deja vu in the G1 Centenary Sprint Cup at Sha Tin, with Inglis Premier Yearling Sale graduate Beat The Clock (Hinchinbrook x Flion Fenena) triumphing for the second consecutive year in the 1200m feature.

Crowned Hong Kong’s champion sprinter in 2018/19, this was the fourth G1 win of the John Size-trained Beat The Clock’s career.

The victory of Beat The Clock continues the outstanding run of success enjoyed by Inglis in Hong Kong, with graduates of Inglis Sales having won more races in the territory since 2018 than those of any other auction house.

Beat The Clock’s breeder Jilly Henderson, said she was proud to see her Noogee Park brand on the international stage.

“He’s a freak – an absolute freak.

“Any horse we breed we follow closely and we’re just so proud that our boutique operation has produced a horse of this calibre,” Henderson said.

“I remember Beat The Clock was such an athletic youngster, he went into prep at Yarraman Park Stud and I know Harry Mitchell really liked him too.

“For the amount of horses we have, to have bred an absolute superstar just gives us a big thrill.

The Noogee Park team are looking forward to next month’s Inglis Classic Yearling Sale, where they will offer four yearlings, including the Foxwedge half-brother to recent dual G3 winner Deprive.

“Not only has the Foxwedge colt (Lot 92) had the pedigree update with Deprive, but the other half-brother by Star Witness was the third top lot of last year’s Classic Sale – $400,000 to Yu Long Investments – so we’re excited to get him to Sydney,” Henderson said.

On what was a strong weekend of results for the ill-fated Yarraman Park sire Hinchinbrook, Saturday’s Rosehill card saw his daughter Cellsabeel leap to $7 TAB favouritism for the G1 Golden Slipper, with a spellbinding performance in the 1100m 2YO contest.

The Sheikh Mohammed Bin Khalifa Al Maktoum colour-bearer – having her second start following an encouraging fourth in the $1m Golden Gift in early November – routed a competitive-looking field to win by six lengths.

The Ciaron Maher and David Eustace trained filly, a $400,000 purchase from the Cressfield draft at the 2019 Inglis Easter Yearling Sale, will now plot a path toward the Golden Slipper which may include the $2m Inglis Millennium at Warwick Farm on February 8th.

Cellsabeel is not the only yearling from Cressfield’s 2019 Inglis Easter Yearling Sale draft to show early promise.

At Flemington on Saturday, the Hayes/Dabernig-trained filly Personal (Fastnet Rock), earned comparisons with Hayes’ champion race filly Miss Finland when she sprinted from last to outpoint a competitive field of rivals over 1100m.

A $640,000 purchase by Tom Magnier/BBA Ireland and racing for Coolmore partnership, Personal will now be aimed towards the G1 Blue Diamond at Caulfield with the $2m Inglis Millennium also considered a possibility en route.