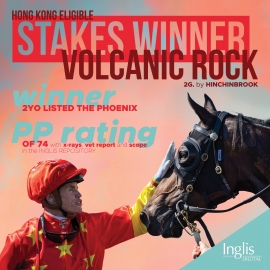 An exceptional catalogue of 561 lots has opened for bidding this afternoon in the Inglis Digital June (Late) Online Sale, headlined by 2YO Stakes winner Volcanic Rock (Hinchinbrook) and a number of Stakes-performed mares in the broodmare category.

Trained by Gai Waterhouse and Adrian Bott, Volcanic Rock is the only Stakes-winning 2YO to be offered for public auction in Australia this season.

His win in the Phoenix Stakes at Eagle Farm two starts ago also qualified him for Hong Kong with a PP rating of 74.

The 2YO gelding is offered by Newgate (as agent) with x-rays, vet report and scope available in the Inglis repository.

There are several highlight lots of note in the June (Late) Online Sale, just some of them being:

• Arigato – 4YO daughter of Choisir and a Stakes-winning mare, she’s a half sister to Stakes winner Tahitian Dancer and a Flemington winner herself

• Full of Beans – Smart Missile half sister to dual G1 winner Kenedna and Spill The Beans, in foal to D’Argento

• Kentucky Tornado – an American-bred mare who has raced in France and Australia, running second to subsequent G1 winner Media Award two starts ago

• Litchfield County 45% Share – Placed at Listed and G2 level at his past two starts, the 3YO Sebring colt is a progressive galloper with the Mick Price and Michael Kent Jnr stable

• Lady Sol – half sister to Dundeel, offered in foal to The Autumn Sun

• Never Fade – half sister to a G1 winner Spanish Moon, offered in foal to Castelvecchio

• Petite Potat – unraced Japanese-bred mare by Lord Kanaloa from a Stakes-winning mare in America, she’s in foal to Magna Grecia

• She’s Alight – WA-based Stakes winner by Tavistock and from a strong family that includes Our Tristalight, Tudor Light and Danske

There are also mares in foal to the likes of Extreme Choice, Written Tycoon, So You Think, Deep Field, Frosted, Microphone, Trapeze Artist, The Autumn Sun, Yes Yes Yes, All Too Hard etc.

Stay tuned on Inglis’ social media channels for a second preview, focusing on the other online sale categories.

To view the catalogue or to bid on a lot, CLICK HERE.