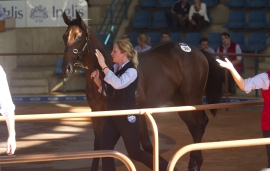 A colt by Easter graduate Fastnet Rock shone on Day Two of the 2013 Inglis Australian Easter Yearling Sale in Sydney when selling for $4 million to Emirates Park Stud.

Offered by Cressfield Stud as Lot 295, the colt by Fastnet Rock from Group 1 winning dam River Dove, demanded plenty of attention as he stepped into Inglis’ sales ring at Newmarket. Bidding started slowly on the strapping youngster before Emirates went toe to toe with Coolmore Stud for the prized colt until the hammer came down at $4 million to the winning bid of Emirates Park CEO Trevor Lobb.

“I just loved the athleticism of him, the way he walked, he’s got the best temperament nothing upsets him. One of those horses you don’t see that often at a yearling sale. To us he was the best colt in the sale,” said Lobb.

“Fastnet Rock is an international sire, he [Lot 295] is out of a Group 1 winning mare and the type of animal he is, if he can gallop for us he is headline stallion, and he’s the Australian stallion,” added Lobb.

John Hawkes, who had tremendous success training for Woodlands Stud when Lobb was General Manager of the Ingham owned operation, will train the River Dove colt, which the pair are hoping will take their new partnership all the way to the top.

“It’s good to get the team going again and hopefully we can have the success we used to have. If he [Lot 295] is the right one, he’ll be the right one to have,” Lobb said.

The son of Fastnet Rock will be raced in partnership between His Excellency Nasser Lootah and Sheikh Mohammed Bin Khalifa Al Maktoum.

The colt’s $4 million tag is the second highest price paid for a yearling in Australia’s thoroughbred auction history, only eclipsed by Black Caviar’s half-brother by Redoute’s Choice that was sold yesterday for $5 million.

Replay of yesterday’s $5 million sale of Lot 131 can be seen in InglisTV’s Day One wrap up HERE.

“To eclipse the record twice in two days in a great thrill, but we are also stoked with the depth across all buying levels at the sale evidenced by the 18% increase in the median from last year,” said Inglis Managing Director Mark Webster.

Redoute’s Choice provided the other two top lots on Day Two of the sale; Eliza Park’s colt from Black Caviar’s grand dam Scandinavia (Lot 319) sold to James Bester for $1,200,000 and Cressfield’s filly from Star Satire (Lot 346) was bought by John Warren for $1,000,000.

Complete sire, buyer and vendor statistics for this year’s Easter Sale can be viewed at www.inglis.com.au

“Day One clearance rate has now risen to 82% following the private sale of 14 of yesterday’s passed-in lots for an additional $1,950,000,” Webster pointed out.

“There is no compromising by Inglis’ experienced bloodstock team in selecting the best yearlings from Australia and New Zealand into the Easter Sale and I would encourage astute buyers to have a look back through the passed-in lots, for Group 1 winners can be purchased from Easter for less than A$50,000 to more than $1 million.

“Gai Waterhouse’s purchase of Epsom Handicap winner Fat Al for just $27,000 at Easter is proof that buyers can aim higher with yearlings from all across the buying spectrum at this quality sale,” said Webster.

Horses passed in during the Easter Sale are available for sale via the Inglis Make-An-Offer Service.

Online Bidding will again by available for those not able to make it to Newmarket for the third and final day of the 2013 Easter Sale tomorrow.

InglisTV and TVN will again be broadcasting the sale, with Sky Racing providing viewers with hourly updates across their network.

Combined Day One and Two Statistics