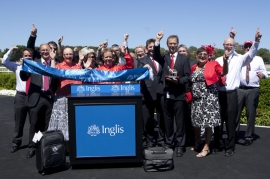 $500,000 in Inglis Race Series prizemoney is up for grabs in less than four weeks with the $250,000 Inglis Classic and $250,000 Inglis Premier races to be conducted on Saturday 7 February 2015. Both races carry black type Restricted Listed status.

The $250,000 Inglis Classic will be run over 1200m at Rosehill in Sydney and is restricted to two-year-olds entered into the Inglis Race Series that went through last year’s Classic Yearling Sale Summer Book or Winter Book. Nominations close 11:00am Monday 2 February.

Gerald Ryan and Triple Crown Syndications used the 2014 Inglis Classic race to launch Peggy Jean into the autumn. The $46,000 yearling buy went on to claim the Group 1 ATC Sires’ Produce Stakes during The Championships only a few months after her Inglis Classic race triumph.

The $250,000 Inglis Premier race will be run over 1000m at Sandown Hill in Melbourne and is restricted to two-year-olds nominated into the Inglis Race Series that were offered at the 2014 Inglis Premier Yearling Sale in Melbourne. Entries close 12:00pm on Monday 2 February.

In addition to the race prizemoney on offer, the winning trainer of both the Inglis Classic and Inglis Premier aces will receive a set of Swarovski Optik EL 42 Swarovision binoculars valued at $3,000. The winning jockeys and the managing owners will also receive an exclusive piece of Antler Luggage valued at $544.

All yearlings offered during the 2015 Inglis Select Yearling Sales Series are eligible for nomination into the $5 million Inglis Races Series.