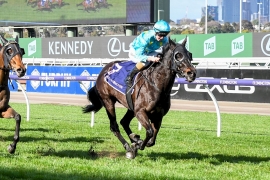 A total of 328 lots have been finalised for the sale, which is now open for bidding.

Acrophobic – talented 3YO who finished 4th, beaten 0.9 lengths in the G2 Stan Fox Stakes in the Spring

Avenue Of Pleasure – well-bred lightly-raced I Am Invincible 3YO, already Stakes placed and a two-time winner, offered as a racing and breeding prospect

Don’telltheboss (pictured) - 4YO Street Boss mare who is a dual Stakes placegetter and multiple Metropolitan winner, offered as a racing and breeding prospect

Liesele – Stakes-winning daughter of Exceed And Excel and dam of undefeated HK excitement machine Blaze Warrior, offered IF to Zousain

Per Perseverance – half sister to G3 winner China Star, offered IF to All Too Hard

Petite Briefs – dam of three runners for three winners who have won a combined 14 races between them, offered IF to Toronado

“With one week of the racing season to go, Inglis Digital graduates have won 1992 races in Australia for the season and there’s every reason to expect that figure will comfortably surpass 2000 in the next eight days, which would be quite remarkable,’’ Inglis Digital’s Business Manager Nick Melmeth said.

“Each and every fortnight the platform continues to produce quality results - be that on the track or in the breeding barn or back in the sales ring - for buyers who take the time to peruse the catalogue, do due diligence and ultimately purchase stock.

“This July (Late) catalogue again has something for everyone so I urge buyers to head to inglisdigital.com and take a look for themselves.’’

The Inglis Digital July (Late) Online Auction runs from today until Wednesday, with the final countdown of bidding kicking in from midday Wednesday (July 28).