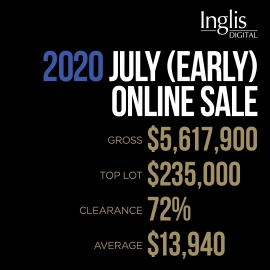 Another stunning Inglis Digital Online Auction has ended, with staggering results across the board leading to several records being broken.

In a remarkable day of online trade:

*Overall top lot Faretti (I Am Invincible) sold to Adrian Bott (as agent) for $235,000, making him the sixth-highest priced horse ever to sell on the Inglis Digital platform and second-most expensive gelding

*The Melbourne Gold top lot sold for $120,000, becoming a new Australian record price for a yearling sold on a digital platform

*The 41 Godolphin broodmares and race fillies sold for a gross of $617,750 to 39 individual buyers from six Australian States and Territories plus New Zealand

*It was the sixth consecutive Inglis Digital sale to gross in excess of $3m.

The colt is a half brother to talented 3YO Melbourne filly Bless Her, which has won her past four starts in Victoria including victories at Caulfield and Sandown at her past two outings.

“Given the current situation I was obviously unable to see the horse myself in person but from what I could see online and from talking to the right people, he’s very reminiscent of a couple of good gallopers I’ve had over the years,’’ Caporn said.

“He walked like a good horse, looks like a good horse, he’s very typical of the Dundeels and the first two out of the mare can both gallop and this colt is bigger and better than either of them at this stage of their development I believe.

“The online process, it’s so easy with Inglis. There’s no doubt Inglis Online is as good as anywhere in the world. The staff are helpful, the process to either buy or sell is very easy, we couldn’t fault it.’’

Maluka’s Luke Anderson was “absolutely thrilled’’ with the result.

“It was great to see him achieve that price,’’ Anderson said.

“To see how he developed the past three or four months, it was a blessing in disguise that this sale was forced back to now for this bloke as he just needed a bit more time to mature and develop which he has.

“He’s a lovely horse with a great attitude, I just like the way he goes about things, he’s athletic, he’s got a lot of attributes you want to see in a nice horse. He’s got a lot going for him.’’

The Gold Sale, which was originally scheduled as a physical auction in April but due to COVID-19 restrictions ended up as an online sale in July, had two yearlings breach the $100,000 barrier, the other being Lot 436, a Teofilo colt out of Hot Augusta, purchased by Hong Kong owner Eden Wong for $110,000.

For any information regarding a passed in lot from the Gold Yearling Sale, please contact Morgan Thomas on 0422 450 363.

The top price of the Godolphin offerings was $65,000 for lot 471, the 3YO filly Delicately (Medaglia d’Oro x Genteel) which sold to Wollongong businessman Tory Lavalle.

“We’ve had some individual breeding prospects sell nicely and we wish all the new owners all the very best with their purchases.’’

The July (Early) Online Auction’s overall sale-topper was Faretti (I Am Invincible x Tai Tai Tess), a lightly raced 3YO that is already a city winner.

“He’s always been a high-profile horse that’s promised us plenty and shown us plenty of potential but due to some really unfortunate circumstances the horse had to be sold,’’ Bott said.

“Once he was listed we were approached by a group of people to continue racing the horse in the hope he can continue to train on and hopefully fulfil the early potential he’s shown us.

“Trading horses online is an ever-evolving way of doing business and these past few months especially it’s become a necessity at times and the Inglis Digital platform is outstanding, very user friendly, we’ve sold and bought online through Inglis and have never had any issues. It’s great.’’

Attention now turns to the July (Late) Online Auction, which is scheduled for July 24-29.