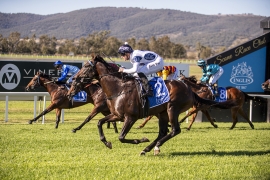 Flying Artie colt Artero produced a stunning turn of foot to come from last to first to win today’s $200,000 Inglis Challenge at Scone.

Jockey Josh Parr had little choice but to go back on the 2YO debutant from barrier 14 but that didn’t stop the juvenile, coming close to the outside fence in the home straight to claim victory in the last stride.

Artero was bred by Greg and Jo Griffin of Lime Country Thoroughbreds with Millennium Thoroughbreds – Lime Country offered the colt in the 2019 Inglis Digital November Online Auction, where their children Jamie and Georgia purchased him for $10,000.

They then re-offered him through the 2020 Classic Yearling Sale in the Highway Session, where Darby Racing purchased him for $26,000.

The victory was a great result for Lime Country, who this week announced they were moving from the Southern Highlands to a new farm at Blandford in the Hunter Valley.

“It’s been a big week and this is just a great result to keep it all going,’’ a delighted Jo Griffin said.

“He was always a very athletic individual and he would have had one of the best pedigrees in the Highway Session last year.

“He was always just so natural and a running type. He’s probably done more at two already than I was expecting he would - I think there’s a lot more to come with this colt and he’ll be a beautiful spring 3YO.’’

Winning owner Scott Darby was blown away by Artero’s turn of foot.

“Gee they don’t do that on debut too often,’’ an elated Darby said.

“He was back near last so to come from there at your first start and run past such a big field like that, that’s pretty impressive.

“To be honest, we thought with the wide barrier and being his first run he might need it, but he showed us we probably need to stand up and take a bit more notice of him now.

“We’re thrilled, absolutely thrilled. There’s a ton of improvement in him so we need to reassess plans now and see where he ends up, but he’s definitely got plenty of ability.’’

A full sibling to Artero (ex Ella Supero) will be offered at next month’s Great Southern Sale at Oaklands, for which the catalogue will be confirmed next week.

The Inglis Race Series continues at Rosehill tomorrow with the running of the $300,000 Listed Inglis Guineas (1400m).

Trainer David Pfieffer’s big day continued in the feature event when his 6YO Laure Me In (Ad Valorem) was victorius in the Listed Scone Cup.

It was a seventh career win for Laure Me In and took his overall prizemoney to $550,000.

Laure Me In is a $70,000 Premier Yearling Sale buy for Paul Willetts and Topline Thoroughbreds, from the Three Bridges draft.

He was initially a $32,000 Inglis weanling purchase for Willetts from Coolmore.

And in the G3 Dark Jewel Classic, Rocha Clock (Pierro) made it back-to-back wins with a strong victory in the fillies and mares feature.

She is a $200,000 purchase for Anthony Cummings from the Coolmore draft at the 2018 Easter Yearling Sale.