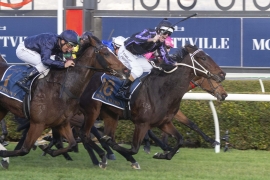 A $5,000 bargain buy today became a darling of the turf when 3YO filly Media Award (Shamus Award) won the G1 Australasian Oaks at Morphettville.

When Mark Arrowsmith parted with what may seem to many as a relatively small outlay at the 2019 Gold Yearling Sale, for him it was his final bid.

And today he was celebrating long and hard as that filly, now known as Media Award, won her first G1, also providing Arrowsmith and Geelong trainer Chris Calthorpe with their first G1s as well.

“When I go to the Gold Sale I have a breeding specialist I deal with and he gives me a short list of around 50, I then go to [Inglis Bloodstock Agent] Mark Dodemaide and get his feedback which gets me down to around 30 horses, then I just sit in there at Oaklands – often next to Mark – and if they come through for $5,000 or less I buy them,’’ Arrowsmith said.

“This filly went to the $5,000 and there were no more bids, but I was one bid away from not getting her because I don’t go above my limit.’’

It was a dream result for Arrowsmith, who trades under his Aintree Park banner, and he now has his sights set on Media Award’s Super One half sister, who is being offered as lot 324 at this month’s Gold Sale at Oaklands, again offered by Bowness Stud who also bred and offered Media Award.

Today’s result adds further to the list of top-class horses offered by Bowness through Inglis, joining the likes of Trapeze Artist, Youngstar and Funstar in recent years.

“The Gold Sale is coming up and it has produced another G1 winner, it’s a bloody good sale,’’ Arrowsmith said.

“Her half sister is there, who I want to buy, but I might have to fork out a bit more now!

To view the Gold Sale catalogue – being held at Oaklands on May 16 and 17 - CLICK HERE.

Media Award becomes the 61st individual Inglis G1 winner since 2018 and brings to 30 the number of whom could have been bought for $100,000 or less.

There is also one progeny of Media Award’s sire Shamus Award being offered at the HTBA May Yearling Sale – lot 123 (ex Dawn Sun) for Golden Grove – which runs tomorrow and Monday at Riverside from 10am daily.

To view the HTBA May Sale catalogue, CLICK HERE.

Earlier on the Morphettville program, impressive 2YO filly See You In Spring (Siyouni) led in an Inglis Ready2Race Sale Stakes quinella when she defeated Silent Theory in the Listed Without Fear Stakes.

It was a second career win from as many starts for the talented filly, who was backing up her comfortable debut victory at Cranbourne.

Trainers Trent Busuttin and Natalie Young teamed up with First Light Racing and Paul Willetts to purchase See You In Spring for $85,000 at last year’s Ready2Race Sale, where she was offered by Will Forrester’s Highlands Racing, as agent for Jean and Karin Dubois’ Woodpark Stud, who also bred the filly.

“She always had a lot of attitude and enthusiasm, despite being a bit small, and it’s good to see her back it up on the track,’’ a delighted Forrester said, who is preparing his fourth consecutive Ready2Race draft through Inglis later this year.

“I broke her in, she had a fair bit of spark about her even at that stage of her education, she was tough and well balanced, she didn’t ride like a small horse, she felt like she had a big effort in her and was a really good mover.

And bargain buy Savatoxl’s amazing career continued in fine style when he scored a 15th victory at just his 27th start when winning the G3 DC McKay Stakes.

It was a second Stakes win from his past three starts for Savatoxl (Kuroshio), who has now won more than $450,000 in earnings.

The Tony and Calvin McEvoy-trained Savatoxl cost just $8,000 to the Alice Springs Turf Club, who purchased at him the Gold Yearling Sale from Ryan Arnel’s Stonehouse draft.

Savatoxl, bred by Mark and Sheryl Atkinson’s Carrington Park, will now be given his chance at an elusive G1 in the Goodwood Handicap, to be run at Morphettville on May 15, where he will take on the likes of fellow Inglis graduates Gytrash and Behemoth.

At Hawkesbury today, Inglis graduates won three of the four features with Sweet Deal, Exoboom and Embracer all victorious.

The timing of the win couldn’t have been better, as she will be offered as lot 58 in Friday night’s Chairman’s Sale at Riverside for Newgate Consignment.

The victory – her 11th overall - took the John Thompson-trained mare’s earnings to almost $1.5m and further cemented herself as one of the most consistent black-type performers of the past four years.

Craig Rounsefell’s Boomer Bloodstock purchased Sweet Deal, who was bred by Pip Cooper, for $67,500 at the Classic Yearling Sale, where she was offered by Lincoln Farm.

“Her race record speaks for itself, she’s a winner of almost $1.5m now, four Stakes races and the $1m The Hunter but what will really attract buyers’ attention when they see her is her physical,’’ Rounsefell said.

“She’s just the most outstanding type, you don’t really get mares that are a better physical than her so I expect she will develop into an ultra-successful broodmare in time.

“She’s being offered at the Chairman’s Sale as a racing and breeding prospect – I would think the G1 Tatts Tiara in Queensland next month would be the ideal race for her so prospective buyers are getting a fabulous specimen with so much upside with Sweet Deal on Friday night.’’

The consistent 3YO Exoboom scored a first Stakes success when victorious in the G3 Hawkesbury Guineas.

It was a 3rd career win for The Peter & Paul Snowden-trained youngster at just start No.7 – he has finished second at his other four runs.

Exoboom, bred by Wilf Mula’s Aston Bloodstock, is a $70,000 Classic Yearling Sale buy for Triple Crown, having been offered by Musk Creek Farm.

And Embracer (Sebring) led in an Inglis graduates’ Stakes quinella when defeating Wayupinthesky in the Listed Hawkesbury Gold Rush.

Resuming from a 10-month spell, Embracer was well supported in betting and didn’t let his supporters down, with jockey Tim Clark easing the 5YO down late in the easiest of victories.

Trainers Gai Waterhouse and Adrian Bott bought Embracer for $280,000 at the Easter Yearling Sale, where he was offered by Widden Stud on behalf of his breeders who include Ricky Surace of B2B Bloodstock.