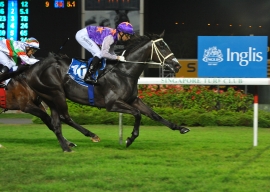 The final lead in race to the Group 2 Aushorse Golden Horseshoe in Singapore was conducted on Friday night, with the experienced War Affair staking his claim as a contender in the series finale.

The Mark Walker trained War Affair (O’Reilly-Kristique) was coming off an eye catching fourth behind Inglis graduate Peace No War in the fourth leg of the rich two-year-old series and finished the better of his rivals to claim yesterday's S$90,000 Inglis Sydney Juvenile Stakes (1200m).

Rival juvenile Bringithome stole a handy lead coming into the Kranji straight, but the winner’s race experienced allowed him to peel off the leaders back and drive home to a welcome victory for favourite backers.

The race carried an S$30,000 bonus which will jackpot onto the Golden Horseshoe because the winner was not Australian bred and sold at an Inglis or Magic Millions yearling sale. But that won’t stop War Affair lining up in the feature event in a fortnight.

“We’ll see how he pulls up. Obviously, if he’s all right, he will then go towards the final Leg in two weeks’ time,” said trainer Mark Walker.

Friday’s win sets up an intriguing battle between War Affair, his previous conqueror Peace No War and the series’ three other leg winners in the S$325,000 Golden Horseshoe on Friday 17 May.

All Australian bred thoroughbreds foaled in Australia, carrying the (AUS) suffix, that were sold as a yearling at auction in Australia by Inglis or Magic Millions are qualified to collect the jackpot bonus of over S$130,000 on the Group 2 Aushorse Golden Horseshoe on Friday, 17 May 2013.

Should a non-qualified horse win the Aushorse Golden Horseshoe, the remaining bonus monies, taking in any previous bonus monies not having been paid-out, will be paid to the connections of the qualified horse that won the greatest amount of prizemoney during the series.

Buyers have two more chances to purchase an Australian bred yearling from Inglis’ Select Yearling Sales Series in 2013 that will be qualified for the bonuses in next year’s Singapore Golden Horseshoe Series: