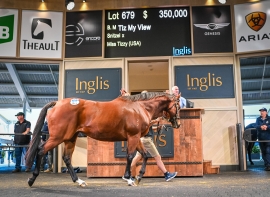 A spectacular Inglis Digital pinhook result topped today’s Australian Broodmare Sale as the curtain came down on a tremendous week of action at Riverside that saw all four auctions achieve significant growth.

It equates to a 14% increase on last year for the corresponding week of trade.

In what has been a record-breaking week at Riverside:

*Today’s Australian Broodmare Sale top lot Tiz My View – offered IF to Hanseatic by Coolmore and selling to Team Lucky Vega for $350,000 – was a $15,000 Inglis Digital purchase less than 12 months ago

“It is unbelievable. It hasn’t sunk in yet, I think I’m still in shock,’’ Timoney said.

As for the upcoming Inglis Digital Sale, which closes from midday Wednesday, Timoney said: “I’ll be shopping. It’s great, I love the Inglis online sales. I’ve been lucky with a few good results, I’ve bought some nice horses from them and it’s great to get this kind of return bringing [Tiz My View] back just a few months later.’’

Team Lucky Vega representative Sam Fairgray added: “With Bubble Palace being by a son of Written Tycoon [in Rich Enuff], we bought her as a good physical for Written Tycoon.

“She was a fast 2YO herself Tiz My View and hopefully Bubble Palace can go on and get black type, if not be a G1 horse and we can have a nice result with this mare moving forward.

“With Bubble Palace’s potential in mind and honestly thinking she could be G1 potential – plus the fact Tiz My View was a lovely physical – we were happy to pay top dollar for her.’’

Today’s second-top lot honours were shared by 6YO mares Ariege (Exceed And Excel x Montsegur) IF to Ole Kirk and Interram (Snitzel x Fortune of War) IF to Pierro.

The duo sold for $340,000 to Paul Moroney/Catheryne Bruggeman and Leongatha Property Holdings respectively.

Verna Metcalfe of Middlebrook Valley Lodge, who offered Ariege on behalf of long-term clients Allan and Kate Gadsby, said the price was well above expectations.

“The mare was originally entered in The Chairman’s Sale but on the advice of the Inglis team we decided to go to this sale instead to be a standout and that’s exactly how it’s played out. So thanks to the Inglis team, they were on the money again. It was great advice.’’

Newgate Farm’s Henry Field, who sold Interram, was equally impressed with the $340,000 price tag for the mare.

“She was a lovely mare in foal to Pierro and a good sort. It was a good strong price for her but it’s been a great day of trade overall,’’ Field said.

“It’s been a very, very strong sale today and it was wonderful trade at the Chairman’s on Friday night, too, so it just carries on from that.

“I think the format’s been excellent. Inglis has really worked hard to get a great buying bench here, a very strong weanling sale into a great Chairman’s event.

“The Chairman’s Sale is now almost an event more so than a sale even. It’s a great evening and everyone enjoyed themselves and to finish off today with good, strong trade in the general session.”

Inglis Bloodstock CEO Sebastian Hutch said the past week well exceeded the expectations of most.

“It has been fantastic and while it is a big undertaking to get through yearlings, weanlings and mares in the space of a week, it has worked very well and it is just so efficient for most vendors,’’ Hutch said.

“We are hugely grateful to the vendors across each of the sales for their support and our team has worked hard to ensure that the nature of the service afforded to vendors and buyers is an industry benchmark.

“To have record sales for HTBA May, Australian Weanling and Chairman’s and then an extremely successful albeit smaller Australian Broodmare Sale today, it really has been an excellent week and one that I think we can continue to develop further.

“The week has demonstrated clearly that there is an appetite for more quality stock at each of these sales and those who have been good enough to support the sales with good horses have been incredibly well rewarded.

“For those who have missed out on securing stock this past week – and that’s a lot of people – I would encourage people to review the passed-in lots, while the current Inglis Digital catalogue has plenty of fillies, mares yearlings, weanlings, there’s something for everyone there and some exceptionally talented racehorses so I urge people to jump online and head to inglisdigital.com and inspect that catalogue ahead of Wednesday’s closing.’’

Buyers’ attention now moves to the digital space with the Inglis Digital May (Early) Online Sale.

The final countdown of bidding begins from midday Wednesday.