Capitalist 2YO sizzles as part of slick Hawkesbury breeze session 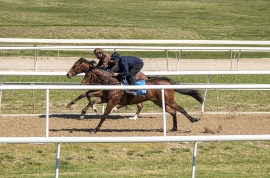 Momentum continues to build ahead of next month’s Inglis Ready2Race Sale, with times and video footage of last week’s breeze up sessions at Hawkesbury and Eagle Farm now available for viewing on the Inglis website.

At Hawkesbury on Friday, 50 2YOs breezed on the polytrack with 39 horses breaking 11 seconds for the 200m breeze, including progeny of first season sires like Merchant Navy, Russian Revolution, Impending and Hellbent, all of whom had offspring run sub-10.5 seconds.

The quickest time of 10.13 was posted by the Capitalist x Orchestrator gelding (lot 40) who will be offered by Blake Ryan Racing.

The son of last season’s leading Australian first season sire by winners, Capitalist, was an $85,000 purchase from the Fairview Park Stud draft at the Inglis Easter Yearling Sale in April.

“When he hit the front, bang, his ears go forward and it shows he was really enjoying his work, he gave me a great feel,” said Ryan of his quickest charge.

“As a group, they all breezed as well as I could have hoped and having shown promise at home, it was great to see them all deliver on breeze day.

“I’m proud of the success that graduates of my draft have had in recent seasons.

“We had four winning graduates in the space of a week at the start of September, including Obfuscation, Different Strokes and Arthur Francis.

“Three of the four were from last year’s draft and all of them look above average.

“We live and die by the success of horses that we produce, so I think people can look at my draft and take confidence that they have been prepared properly for careers as winning racehorses, based on the precedent set by those that have gone before them,” added Ryan.

Glenn Haven Thoroughbreds is strongly represented in the catalogue with 18 entries and had members of their consignment clock eight of the 12 fastest times through the day, led by a Snitzel x Palazzo Cristallo colt.

“I was extremely happy with how our entire draft breezed-up” said Glenn Haven’s Matt Vella.

“The most exciting thing is knowing that these youngsters all had extra gears up their sleeve, so I’m very happy with them.

“Education of racehorses is where I excel, it’s what excites me, and I am very confident in the quality of the prospects that we are bringing to the sale – I think it’s a very good group.”

At Eagle Farm on Wednesday, the draft of Symphony Lodge breezed on the dirt track in preparation for the sale, led by a Headwater x Leica’s Lass colt who clocked 10.17.

By the same sire as high-class Inglis Ready2Race graduate and Singapore Stakes winner Starlight, the colt was picked up for $62,000 at the Inglis HTBA May Sale.

“We couldn’t really have asked for the horses to have gone any better,” said Symphony’s Lodge’s Alison Park.

“With this sale format in mind, we are very particular about the horses that we look to identify through the yearling sales series, so we are delighted with how they have developed and are very much looking forward to the sale.”

To view all the video footage of each lot to breeze to date, CLICK HERE.

The 185-strong Inglis Ready2Race catalogue is arguably the strongest breeze up catalogue ever assembled in Australia.

To have arguably the best 2YO catalogue ever put together is a significant feat, given recent graduates of the sale include dual G1 winner Nettoyer, G2 winners Allibor and Lightsaber, multiple Stakes winner Trumbull, reigning Victoria Derby third favourite Forgot You, high-class HK sprinter Wishful Thinker, Singapore star Starlight as well as prominent local Stakes sprinters such as Malkovich, See You In Spring etc.

The Inglis Ready2Race Sale has asserted itself as the marketplace’s No.1 2YO auction, with over 400 individual winning graduates since 2015 for almost $60m in graduate earnings.

Interestingly, the average earnings per runner of an Inglis 2YO graduate is 30% higher than graduates of the nearest Australian competitor’s sale.