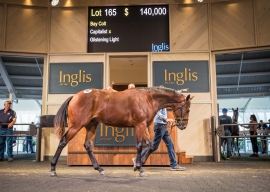 October’s Inglis Ready2Race Sale will be the big beneficiary of today’s HTBA May Yearling Sale leading lots, with the top two purchases set to be breezed up and reoffered at Riverside later this year.

The Day 1 top lot was a Capitalist x Glistening Light colt (lot 165) offered by Huntworth Stud – in conjunction with Redbank North – which sold to Peter Moffatt and Mitchell Williams Bloodstock for $140,000.

In realising his price, the colt became the second-most expensive yearling ever purchased at the HTBA May Sale.

“Peter Moffatt will be taking him to the breeze-up sales here in October. Peter used to work with me at Tal Nolen’s but he’s doing his own thing now in Wangaratta, so hopefully he gets a good result with this horse,” Williams said.

“It has been pretty tough to get them, everyone’s on the same sort of horses and they’re making a bit more money than they used to, those running types.

“Being by Capitalist, he’s the right horse if you want to get a hit out of one and make big money, he’s the flavour of the month.

“He’s a good-bodied and good moving horse who has done everything right, so I think he will be a good breeze-up horse.’’

Huntworth Stud’s Peter Stewart and Bridgett Woodford-Smith purchased the dam Glistening Light for $45,000 at the 2019 Australian Broodmare Sale, in foal to Capitalist.

The resulting foal was today’s yearling (pictured), the first from the mare.

Stewart and Woodford-Smith were originally planning on selling the horse at this year’s Classic Yearling Sale but opted to hold off for the May Sale, a decision which today proved fruitful.

“On pedigree he could have got into Classic but being a November foal, he was just a little bit behind so on the advice of Inglis, we decided to keep him until this sale, particularly because this sale was here at Riverside instead of Scone and it did him so much good because he’s just matured so much,’’ Stewart said.

“I’m not at all surprised by how busy it’s been here all week and how well the sale is going because the yearling market has been so strong and there’s some lovely-bred horses in the catalogue.

“He was really busy all week and there have been some very good people look at him, people I really respect in the industry. He’s a lovely horse, his X-Rays are perfect, he’s got a beautiful temperament, he’s just a lovely colt.’’

The colt was offered by Riversdale as agent for Joe and Max Smithies of Monovale Farm.

He will now be breezed up and offered at the October 5 Ready2Race Sale at Riverside.

The colt was also originally entered for the Classic Sale in February but had to be withdrawn after suffering a slight setback in the lead-up.

“But the extra time has allowed him to mature and being an Ocean Park, they need a bit more time and it’s absolutely worked in his favour, his improvement has been dramatic since Classic,’’ Riversdale’s Nick Hodges said.

“He’s been really popular here all week, he’s done a lot of work which has been great to have that foot traffic here.

“I really believe this rebranded sale has unlimited growth potential and there were no doubt some positive signs on that front on the opening day today,’’ Webster said.

“As anybody can see from the statistics, there are plenty of opportunities in this market and this sale is proven to produce top-level graduates.

“We’re relatively pleased with how Day 1 fared and everybody is looking forward to Day 2 as buyers face their last day of the year to buy a talented yearling in NSW.’’

To enquire about a Passed In lot from today’s action, contact Harry Bailey from the Inglis Bloodstock team on 0420 997 417.

The second and final day of the 2021 HTBA May Yearling Sale will begin at 10am tomorrow at Riverside and will again be live streamed on the Inglis website and Facebook page.

Online Bidding and Make An Offer facilities will again be available.