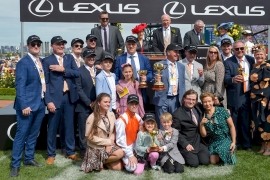 Lanskey, Managing Director of his own construction company in Queensland, raced Vow And Declare’s dam Geblitzt “with a few mates’’ and when her racing days were over, decided to breed with her.

Her first foal – by Star Witness – raced as Lycurgus, himself a $70,000 Inglis Easter purchase who became a Stakes winner.

“We expected we were breeding a sprinter but [trainer] Danny [O’Brien] sent the blood samples to Ireland and they came back as a 2400m horse,’’ Lanskey said of Lycurgus, who won in Stakes company over 2400m at Caulfield.

“So after that, in conjunction with Sheamus Mills I organised for the mare to go to (Coolmore Australia stallion) Declaration Of War and when those blood tests came back, they were saying 2800m-plus.’’

That horse – sent to the final Classic Yearling Sale at Newmarket in 2017 as part of the Kitchwin Hills draft - would go on and race as Vow And Declare.

And today, the 4YO trained by Danny O’Brien became a household name Australia-wide when he won the $7,750,000 Melbourne Cup at Flemington.

“By the time he got to Classic, Danny had seen that Lycurgus was starting to show him plenty so he said he thought he could put something together.

“Geoff Corrigan, the senior owner of Lycurgus came in for 35% and then another 15% and the rest is really family, my sons, nephews, my partner.

Vow And Declare becomes the 39th G1-winning Inglis graduate since 2018 with his Melbourne Cup win.

For Kitchwin Hills’ Mick Malone, today’s result capped off what has been a phenomenal spring carnival which has also netted wins in The Everest and Redzel Stakes for horses carrying the Kitchwin Hills brand.

“This is the race that stops the nation and we’re just doing our best up here in the Hills and we’ve won the Melbourne Cup! It’s unreal,’’ Malone said.

“This horse was born, raised and offered at Kitchwin. Wow.

“I want to give a huge wrap to Sheamus Mills, he played a massive role in this result and he deserves so much credit for this.

“To Paul Lanskey, what a great bloke, they don’t come much better.

“And to my staff, this is a huge result for the farm. They get up at all hours of the morning every day of the year and do all the hard work and to sit together here at the farm and watch one of our horses win a Melbourne Cup, knock me down, I’m speechless.’’

Malone reflected back to Vow And Declare’s early days.

“Shannon Betts of Emeran Park who broke Vow And Declare in and pre-trained him, she rang me one day during that process and said he’s the nicest horse she’s ever broken in in her life,'' Malone said.

“I guess she’s a pretty handy judge too!’’

The Melbourne Cup result continues an extraordinary sequence of success for Inglis, with no fewer than 10 individual Stakes-winning graduates across four different countries since Saturday.