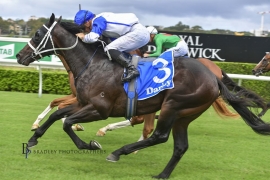 A quartet of Chris Waller-trained 3YOs proved the main attractions in another successful Inglis Digital Online Sale, after selling for a collective $1.475m this afternoon.

All four 3YOs were offered by Chris Waller in conjunction with Coolmore and partners.

“On behalf of the ownership group we are extremely grateful to Inglis for the time and effort they put in to promoting these talented horses,’’ Coolmore’s Racing Manager Rob Archibald said.

“We had confidence in what we were offering to the market and it is such a great platform to showcase quality bloodstock to a diverse buying bench.

“We wish all the new owners the very best of luck with them and thank Chris Waller and his team for managing their careers so well.’’

The top lot Coastwatch (Fastnet Rock( will head to Asia where AP Chan – principal owner of the ‘Famous’ horse names, just as Bon Ho is of the ‘Legend’ horse names – is already eyeing off multiple feature races.

“Coastwatch will be a wonderful addition to the current population of horses in Macau and I would like to see him representing Macau to run in the Hong Kong Macau Cup and even The Dubai World Cup Carnival,’’ Mr Chan said.

“I enjoy my experience as a racehorse owner in Macau, the horsemen and operators there are doing a good job and they deserve to have a good horse of this quality to run for them on the international stage.

“My thanks go to Inglis for providing such a rare opportunity of buying a G2-winning and G1 placed 3YO gelding.

The Inglis Digital market has been increasingly important to me as I always bear in mind that the Derby winner in Macau last year was from an Inglis Digital sale.’’

Today’s second-top lot, O’President (Fastnet Rock), was secured by A Value Consulting’s Dr Alan Lee, who was especially taken by the horse’s second placing behind Rustic Steel in Saturday’s $500,000 The Coast at Gosford.

“O’President really impressed us with his second placing in The Coast last weekend, we expect he will have plenty of improvement to come and be challenging Group races again soon,’’ De Lee said.

“The owner in Hong Kong has not decided yet whether to race in Australia or ship the horse immediately to Hong Kong. Either way, we are sure O’President will perform in top class races where ever he ends up next.

“The HKJC has just increased the special Class 3 winner prizemoney to HK$1m for imported raced horses. This decision led to my client increasing his budget to be able to purchase a very good horse such as O’President.

“We thank Inglis for having this online platform to buy such good options, there is something there for us all of the time.’’

“I purchased him on behalf of a Hong Kong client,” Leung said.

“He has good, solid form in Sydney as well as Queensland and looks to be a big, strong horse that moves well.

“I love the sire Vancouver, a son of Medaglia d’Oro who is the sire of Hong Kong champion Golden Sixty who I also purchased.

“I am very happy we were able to secure Cape Breton via an Inglis Digital Online Sale, which allows clients a variety of choice when it comes to sourcing quality horses.”

Lightly-raced gelding Starman will remain in the Chris Waller stable after they bought out Coolmore and partners to secure the son of Zoustar, who recently trialled impressively at Rosehill against O’President and Home Affairs.

The fifth top lot of the sale was Amateurish (Brazen Beau), a winning daughter of G1 Australasian Oaks winner Rinky Dink offered in foal to Astern, who was purchased for $100,000 by Cornerstone Stud.

Amateurish was one of 15 mares offered in the Godolphin Broodmare Reduction which grossed more than $300,000.

The May (Early) gross of more than $4 million is the 13th consecutive Inglis Digital Sale that has achieved an aggregate in excess of $2 million or more.

Graduates of the platform also continue to shine on the track, with 2212 Australian races having been won this season alone by horses offered through Inglis Digital, for a combined $31,128,804 in prizemoney.

Entries for the May (Late) Sale are now open and will close at midnight next Wednesday, May 18.