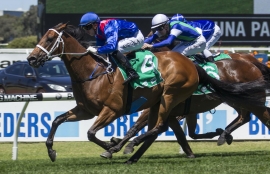 The 7YO mare was purchased by the renowned Hunter Valley operation as a breeding prospect and will be retired immediately, according to Kitchwin’s Mick Malone.

“I actually sourced her as a yearling for Carl Holt who raced her but I loved her so much I have now purchased her on behalf of a client as a broodmare,” Malone said.

“I thought she was good value being a Group 3-placed 2YO and Darci Brahma is starting to do the job as a broodmare sire.

“We’ve got a few options of where we send her this season and we’ll make a decision in due course.”

Malone added that the Inglis Digital platform made it easier for both buyers and vendors to make decisions about purchasing fillies and mares at the start of the breeding season.

“It’s a good opportunity to secure these type of race fillies at a convenient time with the breeding season in full swing and on the flip side, owners like Carl can race them right through until the end of winter before offering them to the marketplace.’’

The sale’s second-top lot was Meraki Miss (I Am Invincible), a half sister to Group 1 Winx Stakes winner Samadoubt.

She was offered by Darby Racing and purchased by Arrowfield Stud for $110,000.

“We bought her in partnership with a new client and she is going to visit The Autumn Sun,” Arrowfield Bloodstock Manager Jon Freyer said.

“We’re very excited about Samadoubt (Not a Single Doubt), he has obviously established himself as a top-class horse with more to come.”

Group 3 winner Red Typhoon (Hold That Tiger), consigned by Milburn Creek in foal to Merchant Navy, was secured by Richard McClenahan for $70,000.

Equal-third top lot at $70,000 was Listed-winning import Radipole (Rock of Gibraltar), who has placed at Group level on multiple occasions for Ballymore Stables in Victoria.

Inglis Digital Business Manager Nick Melmeth said the switch to a twice monthly had been well received by the marketplace.

“Vendor feedback, in particular, has been very positive as it helps them to service their clients’ needs in a timely manner,” Melmeth said.

“It just reinforces the ease, convenience and cost-effective nature of online selling and to turn over $2.9 million since the start of August, demonstrates the ever-increasing momentum of the online platform.”

The September (Early) Online catalogue grossed $972,900 and recorded the highest average of the year to date at $13,327.

Entries close for the September (Late) Online Auction next Wednesday, September 18 at midnight.