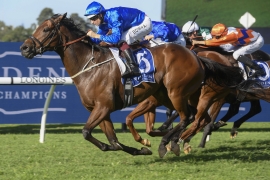 Sitting three-deep for the majority of the 1350m journey, the Premier Yearling Sale star wasn’t deterred, careering away for a dominant win, his third consecutive Stakes success.

Bred by Harry Perks’ Toorak Thoroughbred Breeding Trust, Dawn Passage will now back up in the Stradbroke, the feature race of the Queensland carnival.

Dawn Passage’s trainers Gai Waterhouse and Adrian Bott – along with Blue Sky Thoroughbreds – paid $150,000 for their talented star, who was offered by Mill Park Stud.

Esperance (pictured, photo by Bradley Photos) will be offered for unreserved sale in the online auction as part of a unique 18-horse draft for Godolphin featuring a range of horses from seasoned veterans to unraced 2YOs and a vast range of up-and-coming 3YOs.

Full details of the Godolphin consignment will be available in coming days.

The June (Early) Online Auction will take place online at inglisdigital.com from June 5-10.

Also at Rosehill, evergreen 6YO Wu Gok (Sebring) resumed with a barnstorming victory in the Listed Lord Mayors Cup, the feature event on the nine-race card.

Trained by Chris Waller, Wu Gok was having his first run since the early autumn and proved he was back to his best with a dominant win first-up over the 2000m.

“Full credit to the team for this horse,’’ Waller said.

“He went out for a short spell after the autumn where he wasn’t performing as well as we would have hoped and they’ve done a great job out at The Hermitage.

“We’ve backed our judgement and had him ready to go first-up and gee, what a win.’’

It was a 10th career win for Wu Gok, a $120,000 Easter Yearling Sale purchase for Anton Koolman Bloodstock/Hermitage Thoroughbreds, from the Widden Stud draft.

The 2YO daughter of Exceed And Excel was also entered for today’s juvenile race at Rosehill but trainer Chris Waller decided to target the harder yet more valuable Queensland Stakes race, and September Run did the rest.

It was a first Stakes win at just start No.4 for the Greg White-bred 2YO, a $380,000 Premier Yearling Sale buy for Hermitage Thoroughbreds from the Blue Gum Farm draft.

September Run will now likely be spelled in Queensland before being targeted at some of the better 3YO fillies races during the spring in Sydney and Melbourne.

Trainers Toby and Trent Edmonds have done a wonderful job with the filly, who has now won six of her nine career starts – and two consecutive at Stakes level – for $270,000 prizemoney.

They purchased the John Robinson-bred filly for just $40,000 at the Classic Yearling Sale, where she was offered by Vinery Stud.

Vinery will offer her Star Turn half sister (ex Logan’s Choice) at Easter Round 2 on Sunday July 5 at Riverside Stables.

The catalogue for Easter Round 2 will be available online mid next week at inglis.com.au.

Today’s results takes Inglis graduates’ tally of Stakes wins for the 2019/20 season to 152, more than 30 more than its nearest competitor.

In Perth untapped juvenile Dunbar (Vancouver) kept his unbeaten record intact with a dominant win in the 2YO event over 1000m.

Trained by Grant and Alana Williams and raced by Bob and Sandra Peters, Dunbar made it two from two with a comfortable victory.

Dunbar is a $180,000 Inglis Ready2Race buy for Hunter Valley Bloodstock from John Ramsey.

Ramsey purchased the horse to pinhook from the Premier Yearling Sale, where he paid $70,000 for him from Supreme Thoroughbreds’ draft.

Entries for the 2020 Ready2Race Sale open next week.