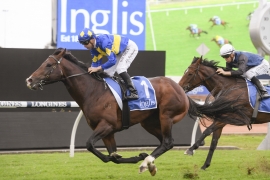 Talented Premier Sale colt Dawn Passage (Dawn Approach) will be given his chance at G1 level during the Queensland carnival following another dominant victory in today’s Listed Inglis 3YO Guineas at Rosehill.

The win took his career earnings to over $600,000 – he was a $150,000 Premier Yearling Sale buy for his trainers Gai Waterhouse and Adrian Bott and Blue Sky Thoroughbreds, from the Mill Park Stud draft.

“He’d be a great lightweight chance. He seems to be well in the market, is improving with every run and racing with great confidence so it’s certainly something to look at for us,’’ Bott said.

“It was a really tough effort from the horse today, I think he really showed his maturity.

“We had to ride him out of his comfort zone but with that maturity now he’s really learning how to race, he was able to show a bit more tactical speed and really put himself in the race.’’

Dawn Passage (pictured) firmed into an $8 equal favourite with TAB for the Stradbroke following today’s win.

“From the word go he was just a great type with a great temperament, one of those horses you wished every yearling would be like,’’ Watson said.

“To put two nice Stakes races together like that is fantastic to see and hopefully now we might get to see him in Queensland.’’

Winning trainers Waterhouse and Bott received a pair of Swarovski Optik binoculars after the race for their success in an Inglis Race Series event.

Owners of an eligible yearling yet to pay up for the lucrative Inglis Race Series for 2020 graduates can contact a member of the Inglis staff to do so.

Later on the Rosehill card progressive Team Hawkes-trained colt Dirty Work (Written Tycoon) made it a hattrick of wins – and a first Stakes success - with a comfortable victory in the Listed Ortensia Stakes.

Jockey Tommy Berry took a sit behind the speed but when he asked for an effort of the 3YO he didn’t disappoint, showing an electric turn of foot to annihilate his opposition.

The Rifa Mustang-bred Dirty Work is an $800,000 Easter Yearling Sale purchase for owners Spendthrift Australia, from the Sledmere Stud draft.

The 3YO daughter of So You Think made it win No.4 at start No.7 with a dominant performance in the staying feature on Adelaide’s signature race day.

“I think she’s an awesome filly and there’s no question in my mind that with any luck she would be seven from seven now,’’ Bester said.

“She was a lovely filly at Easter who from day one I thought was an Oaks type and while she narrowly missed gaining a start in the Oaks there a fortnight ago, hopefully in the spring she can come back and win some nice races during the carnival for us all.’’

The G2 Matriarch Stakes is run at Flemington on the final day of the Melbourne Cup Carnival.

Bester paid $180,000 for Realm of Flowers at the 2018 Easter Sale from the Arrowfield Stud draft for a syndicate that includes he and his wife Bridget as well as the likes of Kia Ora Stud, Eric Lucas and Robert and Barbara McClure.

The trio of Realm of Flowers, Dirty Work and Dawn Passage are part of 35 Australian Stakes-winning 3YO Inglis graduates for this season.

The 4YO has raced in Stakes company at 18 of her past 20 starts, with a further five Stakes placings to go with her black-type victories, making her a valuable broodmare prospect in time.

Her trainer John McArdle of Redgum Racing purchased her for just $80,000 from the Flinders Park Stud draft at the 2017 Premier Yearling Sale.