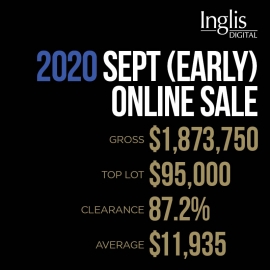 Waugh parted with $95,000 for lightly raced 4YO Garrison, a winner of two of his past three starts for former trainers Peter and Paul Snowden, whom Waugh sought advice from prior to purchasing the gelding.

“I had a chat to Peter and Paul about him, they both really liked him as a horse and his form is really good, he’s probably been a bit unlucky not to have won a couple more races actually so it’s nice to be taking him home,’’ Waugh said.

“We’ll get him here to the stables and at this stage keep him in work and keep him racing, given at his past three starts he’s won two and finished a third placing as well.

“He’s a Provincial Championships horse for us ideally. He’s got nice potential, he’s only had eight starts so it’s all ahead of him, we’ll just see where he ends up but that’s the long-term plan for him.’’

The second top lot was 4YO Rubick mare The Spell, offered unreserved by Paul Perry Horse Training in the broodmare category, who was purchased by Boomer Bloodstock on behalf of Daandine Stud.

Craig Rounsefell went to $85,000 to secure the a half sister to G1 Champagne Stakes winner The Mission and Stakes-placed 2YO Smart Amelia.

“There are some really good opportunities in the Inglis online Sales if you do your homework [and] the The Spell was a lovely find for Jan Clark's Daandine Stud,” Rounsefell said.

“She was an expensive yearling ($420,000 Inglis Easter) and looking back on my database, my notes showed she is a quality type so we are hoping she puts that into her future progeny.

“She is from a fast, two-year-old family and is a perfect fit for the Daandine broodmare band."

“The stable is going really well. We’ve got a number of people that are keen to join and I think this horse profiles so well for South Australia,” Hickmott said.

“Lake’s Folly is low rated, has high peak figures in his form using the form analysts’ work and he has plenty of upside.

“I’ll put him to the open market and attract some new owners as well hopefully, so it’s very exciting.

“I love buying with Inglis Digital, it’s a fantastic platform, extremely transparent and gives everyone everything they need to get a clear picture of the product being offered.”

Lake’s Folly is the top lot to date to be offered by Anthony Freedman Racing.

“It’s another great result that Anthony and Sam Freedman have had on the Inglis Digital platform,” Racing Manager Brad Taylor said.

“Lake’s Folly was very solid for his previous owners, winning or placing in seven of his 11 starts.”

The September (Early) Sale concluded with a gross of $1.87 million and an extraordinary clearance of 87% from 185 lots catalogued.

CLICK HERE to view the full catalogue of results or to make an offer on a passed in lot.

The September (Late) Online Sale will be held from September 25-30, with entries closing at midnight (AEST) Wednesday, September 23.