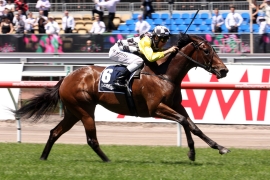 The Unreserved Reduction of broodmares and race fillies from Think Big Stud to be offered at the Inglis Australian Broodmare and Weanling Sale next Monday offers a rare opportunity to tap into the bloodlines that have made Dato Tan Chin Nam’s famed colours some of the most well-known and successful in the country.

Not many weeks pass that the familiar black and white chequerboard with yellow sleeve colours are not seen to advantage, most recently aboard Think Big homebred High Midnight at Rosehill on Saturday.

A four year-old gelding by High Chaparral (IRE), High Midnight won his fifth race from 14 starts taking his prizemoney in excess of $280,000.

Think Big Stud’s proven sire Pendragon was in hot form in Adelaide with Killarney Kid making it three wins in a row when successful over 2020 metres, while quality filly Miss Gunpowder was a close second in the Listed SAJC Redelva Stakes at her second run back from a spell after winning the Group II Tranquil Star in the spring.

One of the flagbearers for Think Big Stud in recent years has been Champion 3YO Filly Faint Perfume (pictured), who headlines their reduction draft and will be offered as Lot 274.

A daughter of world renowned sire Shamardal (USA), her first foal is the promising winner Iron Boss and she will be offered in foal to champion sire Redoute’s Choice.

Think Big will present 38 lots including four well-bred race fillies from very successful families by So You Think and Pendragon.

The following are some of the draft highlights with many mares in foal to Northern Meteor’s brilliant son Eurozone, who was raced by Dato Tan Chin Nam in partnership with great success.

Eurozone is being given every opportunity for success at Newgate Farm and has covered nearly 300 mares in his first two seasons.

All Time High had a winner for Godolphin at Cranbourne last Friday with 3YO Lonhro gelding Spiral showing good promise.

Lot 262 Think Money – Quality staying filly by Danehill Dancer (IRE) that was second in the Group I ATC Australian Oaks and fourth in the Group I VRC Oaks. From the family of current Kiwi Group I winner Dukedom.

Lot 267 Yurrapendi – Four time winning full sister to progressive 3YO filly Subsolar, who is trained by Chris Anderson and heading to the Group III BRC Doomben Roses. From an international family featuring outstanding French Group I winner Move in Time.

Lot 269 Ares De Lago – By the current leading broodmare sire in the country Encosta de Lago and is carrying a full sibling to stakes-placed Smart Lad as she is in foal to Prince Arthur.

From a proven Group I producing family that includes Mnemosyne, the dam of last Saturday’s impressive Sydney 2YO debut winner Impending.

Lot 272 Dance on the Moon (IRE) – Winning dam of Group III winner Awesome Planet, the dam of smart stakes-winner Awesome Rock, who won the Group I VRC Australian Cup before losing it on protest.

Lot 277 Hilylia - Half-sister by High Chaparral (IRE) to Group III winner Shamalia from the family of US Group I winner Super Quercus.

Being offered as a racing and breeding proposition.