Easter asserts itself as the place to buy - yet again 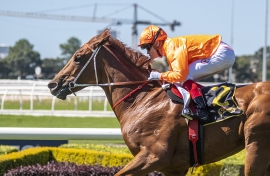 The Easter Yearling Sale today provided buyers with yet another timely reminder as to why it’s the Southern Hemisphere’s No.1 equine auction with three Stakes winners and a massive G1 pedigree update ahead of this year’s renewal.

While Great Southern Sale graduate On The Bubbles (Brazen Beau) won his first G1 in New Zealand in the Sires Produce Stakes at Awapuni, it was Inglis Easter that again flexed its muscle with key Stakes winners at Rosehill.

“We’re really very excited about next week, the build up at Riverside the past couple of days has been fabulous and today’s results really could hardly have been better for Easter,’’ Inglis’ General Manager of Bloodstock Sales and Marketing, Sebastian Hutch, said.

“All three of those Easter Stakes winners today were purchased for less than the sale average of their respective sale year and that will be the case next week as well that statistically two-thirds of the catalogue will sell for below the overall average, so there will be immense value to be found as always at Easter.

“Statistically, on a global scale, Easter is the sale where you are most likely to buy a top-class horse of any yearling sale in the world.’’

The 2YO Saif (pictured) became a G3 winner at just start No.3 with his Schweppervescence win.

The talented juvenile has now won two of his three career starts and appears set for a big future.

His trainers Team Hawkes bought Saif for $290,000 at last year’s Virtual Easter Sale from the draft of Coolmore, who also bred him.

“He caught the eye of Team Hawkes as a yearling and they are great judges.

“His brother possesses many of the same qualities with great scope and athleticism and we expect him to be well found at auction on Wednesday.’’

Vancouver 3YO Yaletown will look to become the fifth consecutive Tulloch Stakes victor to back up and win the G1 Australian Derby following his all-the-way G2 success today.

Trainers Gai Waterhouse and Adrian Bott teamed up with Coolmore’s Tom Magnier at the 2019 Easter Sale to purchase Yaletown – who Max Whitby bred - from the Kitchwin Hills draft.

He has now won two of his four starts and firmed into $15 with TAB for next Saturday’s $2m Derby at Randwick on Day 1 of The Championships.

Signore Fox (Exceed And Excel) scored a fourth career Stakes success when victorious in the G3 Star Kingdom at Rosehill.

Team Snowden bought the now 5YO entire for $300,000 from the Coolmore Stud draft and for champion jockey James McDonald, it was a fifth win on the horse from five rides.

Signore Fox is bred by Johann and Gaynor Rupert’s Drakenstein Stud and is raced by Joe Stambe.

Today’s was his ninth victory.

In the G1 Vinery Stud Stakes at Rosehill today, Frankel filly Hungry Heart powered down the outside to claim a maiden top-level success.

She is raced by Yulong, who will offer her Snitzel half sister (ex Harlech) at next week’s Easter Sale as lot 328.

“She’s a very sharp looking filly, strong, good shoulder and hind quarter, moves well and importantly has a great temperament,’’ Yulong’s Sam Fairgray said of lot 328, which will be offered on Wednesday at Riverside.

“Compared to Hungry Heart there are many similarities but being by Snitzel, this filly’s got a bit more strength about her at this stage.

“She’s been popular to date and after today’s win I suspect it will only have her out of her box many more times the next three days.’’

Burnewang’s Cathy Hains purchased On the Bubbles’ dam More Bubbles from the 2018 Great Southern Sale along with the late Steve Brem and today received the perfect reward, a memorable debut G1 for the farm.

“He had a lovely frame as a young horse and we always thought he’d develop into a nice horse.

“We took him to Great Southern and he didn’t have perfect X-Rays so while he was extremely popular in the lead-up, most were turned off him from the X-Rays but you know what? He’s now a Group 1 winner.

“Buyers are all the time learning the challenges that X-Rays present but I think the good judges are more forgiving and Bevan Smith is an outstanding judges so credit to him.

“I’ll definitely be on the bubbles tonight, we all will be!’’

Smith was ecstatic with the result.

“It’s unbelievable, such an amazing feeling. He was one of the very first horses I bought since going out on my own and Ben was one of my biggest early supporters so I’m so thrilled for everyone involved,’’ Smith said.

“He always looked a precocious type, which he has obviously turned out to be, and I’m sure that’s not the last Group 1 he’ll be winning.

“This year has been fantastic for me, very rewarding both on and off the track and I’m hoping that can continue next week as we get to Inglis Easter. I can’t wait.’’

Back at Rosehill and consistent mare Nimalee (So You Think) led in a First 4 of Inglis graduates in the G2 Emancipation Stakes.

The Premier Yearling Sale star has now won six of her 12 starts – with four minor placings - for $350,000 in earnings for her connections and trainer Matthew Smith.

Bred by Cressfield, Nimalee is a $270,000 buy for Brett Howard’s Randwick Bloodstock, from the Millford Thoroughbreds draft.

There were two other significant Easter pedigree updates resulting from today’s racing.

At Caulfield, 3YO filly Minhaaj (Exceed And Excel) resumed victorious for Lindsay Park to secure a third career win from just seven starts.

Yarraman Park is offering her sister (ex Telaawa) as lot 122.

And at Kembla, Woodpark Stud’s Jean Dubois unearthed an impressive 2YO debutante in Arnaqueur (Astern), who won strongly.

Lime Country is offering his Not A Single Doubt half brother (ex Aloona) as lot 187.

The 2021 Easter Yearling Sale commences 10am this coming Tuesday and Wednesday at Riverside.

Inspections continue at Riverside tomorrow and Monday and again on sale days.