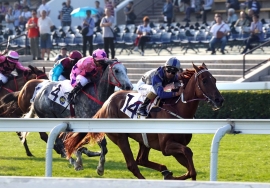 If there were any question marks regarding the star quality of Hong Kong sprinter Aethero, the 3YO extinguished them in emphatic fashion at Sha Tin on Sunday, demolishing a high-class field in in the G2 Jockey Club Sprint over 1200m.

In a blistering display which saw Aethero within .08 seconds of the long-established track record of Sacred Kingdom, the son of Sebring led throughout and showcased sustained speed to defeat fellow Inglis graduates Hot King Prawn, Beat The Clock and Full Of Beauty.

Aethero was bred by Tyreel Stud’s Linda and Laurence Monds and was purchased by George Moore for $575,000, with their five-strong draft at the 2018 Easter Yearling Sale also including eventual Inglis banner winner Espaaniyah.

“We are overwhelmed to be honest – I can’t put into words what results like these mean for Laurence and I and the entire team at Tyreel,” Linda Monds said.

“These results make it all worthwhile, all the hard work everyone on the farm puts in and it’s not just getting up and working long days, it’s also their hearts and souls so it’s special to share these wins with the whole team.”

“We bought Pinocchio in foal to Foxwedge, the year we took over Tyreel Stud,” Linda Monds said.

“We’ve always tried to find the right physical match for her and she has just done the most phenomenal job,” while noting that the mare is also the dam of high-class Sydney based G2 winning sprinter and Inglis Classic Sale graduate Classique Legend.

“She’s now in foal to I Am Invincible and Easter 2020 can’t come soon enough for the So You Think half-brother to Aethero and Classique Legend, who we firmly believe is another superstar in the making,” added Monds.

Aethero – trained by champion trainer John Moore – has now stamped his claim on the G1 Hong Kong Sprint at the International meeting on December 8, where he will look to add a second stakes victory to his formidable record of five wins from six starts.

The success of Aethero in Hong Kong follows a stellar day on Saturday for Inglis graduates in Melbourne and Perth, with a total of six stakes winners yesterday.

In Perth, Bob Peters’ colours were again to the fore, with promising 3YO filly Tuscan Queen victorious in the G3 WA Champion Fillies Stakes (1600m) at just her fourth start.

Offered by Coolmore Stud at the 2018 Inglis Easter Sale, the daughter of Fastnet Rock and G3 winner Tavarnelle (Zabeel) was bought by Damon Gabbedy’s Belmont Bloodstock – on behalf of Bob and Sandra Peters – for $300,000.

“I actually really liked two fillies in the same draft at the same sale, but Tuscan Queen is the one I ended up with and it has worked out nicely,” Bob Peters said.

“I didn’t realise how good she was yesterday, until I watched the replay.”

“It was a really hot day at the races and hopefully she recovers in a manner that allows us to look at the G1 Kingston Town in three weeks time.”

Tuscan Queen’s half-sister, by American Pharoah, will be offered at the 2020 Inglis Easter Yearling Sale on behalf of her breeders Michael and Gail Crismale.

“We were delighted when we realised that she had been bought by Bob Peters and it is hugely fulfilling to see her mature into not just a group winner, but a filly with G1 potential” said a delighted Michael Crismale.

“The mare has been very good to us and we are very much looking-forward to her American Pharoah filly going to the Easter Sale, particularly in light of the fantastic start at stud that the sire has made in the US” he added.

The win of Tuscan Queen brings to 24 the tally of Inglis graduates in the current 3YO crop to win stakes races in Australia so far this season.

After winning the G3 Prince Of Wales Stakes at Ascot earlier this month, Inglis Classic graduate Flirtini made it a G3 double in the Colonel Reeves Stakes.

The 4YO mare by Artie Schiller was bred by Emirates Park and bought by Barry and Jan McRostie for $150,000 from the Emirates Park draft at the 2017 Inglis Classic Yearling Sale.

The G1 Winterbottom Stakes was mooted as a possible short-term target by trainer Simon Miller post-race and should she go there, she will be seeking to become the 40th G1 winning Inglis graduate since the start of 2018, with the aforementioned Aethero and Tuscan Queen also looking to add to that tally before the turn of the year.