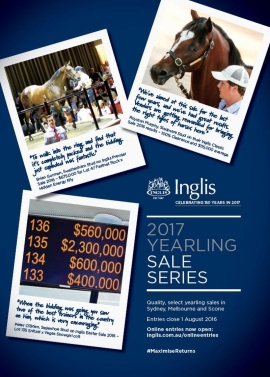 Entries are now open for the 2017 Inglis Select Yearling Sales Series featuring over $1 million in vendor and supplier bonuses and new Gold Riband Session for Classic – Book One.

2,000 yearlings were sold at a clearance rate of 87.4% and average of $99,000 across the Inglis Select Yearling Sales Series this year, and those market leading results have been mirrored on the racetrack with Inglis being the leading auction source of 2YO Stakes Winners and Group 1 Winners in Australia for 2015/16.

“As vendors now look towards 2017 it is important to recognise that if you choose to sell with Inglis you have a higher probability of selling and at a greater price. Our average selling price is 20% more and clearance rate almost 3% greater than our nearest rival,” points out Mark Webster, Inglis’ Managing Director.

“This season vendors have celebrated the Group 1 success of 22 graduates they offered through Inglis, and selling with the market leader is going to become even more attractive in 2017 with a new Gold Riband Session and $1 million Golden Slipper Bonus available to vendors and suppliers at the Classic Yearling Sale – Book One,” adds Webster.

Entries for the 2017 Inglis Select Yearling Sales Series can be completed online at inglis.com.au or by downloading the entry form HERE.

The Inglis Classic Sale achieved the greatest growth of any yearling sale in Australasia this year and proved itself an excellent platform to promote early running 2YO types, as witnessed by the success of Group 1 winning graduates Yankee Rose and Extreme Choice.

In 2017 the Inglis Classic Sale will look to reach even greater heights, kicking off with a new invitation only GOLD RIBAND Session on Saturday night for Inglis selected yearlings with the pedigree and conformation to exceed in the elite two-year-old races. Inglis will pay the initial Golden Slipper nomination fee for every yearling sold during the Gold Riband Session, as well as a $100,000 bonus to the Vendor/Supplier of the session’s first stakes winner.

In a boost to ALL vendors and suppliers supporting the Classic Sale in February, if ANY horse sold at Book One of the 2017 Inglis Classic Yearling Sale wins the 2018 Golden Slipper, Inglis will pay a $1,000,000 bonus split evenly between the named vendor and supplier. Extreme Choice jumped as the favourite and Yankee Rose stormed home for second place in the Golden Slipper this year, indicating the real rewards this offer provides the sale’s supporters.

Full details on the Gold Riband Session and $1 million Golden Slipper Bonus available to vendors and suppliers at the 2017 Inglis Classic Yearling Sale – Book One, go to inglis.com.au/GoldRiband

The growth of the Inglis Premier Yearling Sale in Melbourne has continued for seven consecutive years, with the average doubling from $55,000 to $110,000 through the quality of horses being entered by vendors and an increasingly diverse buying bench, both local and international. Sessions I, II and Blue Riband all went to new heights in 2016, all while graduates were racing to victory in the Newmarket Handicap and Durban July, just as they have before.

Foremost in the Southern Hemisphere is the Inglis Australian Easter Yearling Sale, which has no peer in showcasing the finest progeny of the world’s best sires to a globally influential buying bench. Buyers recognise that Easter delivers the greatest opportunity for success on and off the racetrack, thus the best sires whose best progeny set new Southern Hemisphere records at Easter 2016 were Snitzel, Frankel, Hinchinbrook, Medaglia d’Oro, Not A Single Doubt, Dalakhani, All Too Hard, Choisir, Your Song and Sebring.

Inglis is celebrating 150 years in 2017 and through superior client service and innovations such as Gold Riband the company reinforces its dedication to providing the best market place for vendors and suppliers to maximise their sale ring returns.