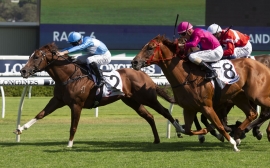 Any number of future winners feature as part of the Inglis Digital January (Early) Online Sale catalogue of 295 lots, which is now open for bidding.

Overkill – Consistent son of Fastnet Rock who has won or placed on 8 of 14 starts for over $156,000 in earnings

Raffinato – City winning daughter of Fastnet Rock with earnings in excess of $150,000 offered in foal to the promising young sire Invader

Shadow Doll – Dam of this season’s G3 performed New York Baby, offered in foal to Written By with a Puissance de Lune colt at foot

Unforgiven – Lightly-raced, winning son of Snitzel and a half brother to the high-class pair Bull Point and Siege Of Quebec

The catalogue also includes mares in foal to the likes of Cosmic Force, Fierce Impact, Flying Artie, Graff, Grunt, I Am Immortal, Royal Meeting, Supido, Tassort and Unite And Conquer to name a few.

Also included are mares with foals at foot by the likes of All Too Hard, Brave Smash, Calyx, Encryption, Highland Reel, Invader, Lean Mean Machine, Magnus, Santos, Spieth, Supido, Tassort, Territories, Toronado, Yes Yes Yes and Xtravagant amongst others, with a number offered as appealing 3-in-1 packages.

2021 was a year of extraordinary success for Inglis Digital graduates, with over 2520 Australian races won by over 1600 individual graduates.

Recent highlights include the success of Classy Rebel and Tycoon Thunder, both of whom won 9 times in 2021 having been purchased on Inglis Digital for $4,250 and $20,000 respectively, $600 purchase Curran who won 4 times, was G2 placed and picked up over $372,000 in prizemoney and December Stakes winner Charmmebaby who was bought for just $14,000.

The final countdown in the January (Early) Online Sale will commence at 12pm (AEDT) on Wednesday, January 12.

To view the catalogue or register for bidding, CLICK HERE.