Funstar on the market as Digital Sale launches 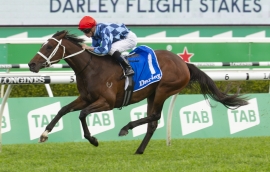 G1-winning superstar Funstar headlines the catalogue for the Inglis Digital July (Early) Online Sale, which is now open for bidding.

Funstar, winner of the 2019 G1 Flights Stakes at Randwick among an outstanding racetrack career that saw her win $1.14m in earnings from five victories and five minor placings – including three at G1 level – is the headline act.

The 4YO mare is the most high-profile horse ever offered on a digital sale and is sure to attract the attention of all the major breeding operations from around the world.

At her peak, Funstar’s Timeform rating reached an impressive 117, officially marking her down as one of the best 3YO fillies of the past decade in Australia and ahead of the likes of Shoals, Catchy, Global Glamour, Libertini, Omei Sword, Yankee Rose, Nakeeta Jane, Invincible Star, I Am A Star etc.

In a remarkable opening to the sale this afternoon, a bid of $1m was placed on Funstar within minutes of the catalogue going live, instantly putting her on the market.

While Funstar (pictured) is the standout offering in the catalogue, she is complemented by some other stunning entries including:

Alliterate – Metro-winning mare from the family of In Her Time and Yes Yes Yes, offered in foal to Deep Field. She beat subsequent G1 winner Spright when winning the prestigious Wellington Boot as a 2YO

Capital Raising – Dam of Stakes winner Global Thinking, in foal to So You Think carrying a full sibling

See You In Spring 5% Share – 2YO Stakes winner by Siyouni and from an international black type family, with G1 ambitions in the Spring and beyond

Aside from the aforementioned, there are also mares being offered in foal to the likes of So You Think, Russian Revolution, Merchant Navy, Cosmic Force, Territories etc.

“While Funstar is obviously a standout, there is a bevy of quality race fillies and broodmares in foal on commercial covers, the demand for which is exceptionally strong,” Melmeth said.

“For those looking more at racehorses, the Inglis Digital platform continues to provide exceptional opportunities for buyers, with almost 1900 Australian winners coming this season alone.”