G1 mare one of many highlights of September (Early) Online Sale 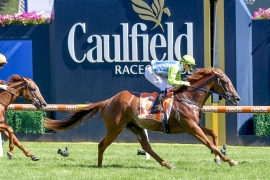 A star studded 396-strong Inglis Digital catalogue has opened for bidding, with the dam of G2-winning 2YO Not An Option just one of the showcase lots on offer.

Chintz (Savabeel), a G2 winner and dual G1 placed mare, is from the family of Mo’unga and an outstanding opportunity for breeders as the Southern Hemisphere season gets underway.

The 12YO mare’s two foals to race are both winners, including Not an Option, while her 2YO Invader filly was retained and is currently in work.

She also has a Curlin colt bred to Northern Hemisphere time at Woods Edge Farm in Kentucky.

Another headline lot is the blisteringly fast News Girl, a multiple Group performed daughter of Magnus, who retired with earnings just shy of $350,000.

A full sister to Flemington Stakes winner Front Page, News Girl won five times including at Caulfield, where she clocked 1.02.55 over 1100m, just 0.82 outside the track record of Here De Angels.

• The Astrologist 5% Share – twice a Stakes winner including the G3 Aurie’s Star, this 5YO gelding trained by Leon and Troy Corstens is running in the G2 Bobbie Lewis tomorrow, Saturday

• Danon Roman – winner in Japan, at Flemington and Stakes placed in South Australia, he was 2nd in the Darwin Cup last start and would suit the Country Cups circuit

• Duty – 5YO gelding by Fastnet Rock, twice a winner from 11 starts and placed at Canterbury last start

• Global Sanction – Melbourne Metro winner by Sebring from G3 winner Global Balance and the family of Spinning World, offered as a broodmare

• Governor – 3YO I Am Invincible colt from G1 performer Thinking Of You, won a barrier trial at Rosehill mid August

• Jetline – 1/2 sister to G1 Australian Derby winner Angel of Truth, offered in foal to So You Think in the Superhorse Trust Reduction

• Lady Sol – 1/2 sister to Dundeel, eing offered with a filly at foot by The Autumn Sun

• Libiamo – Caulfield winner on debut, this 3YO filly by Written Tycoon is offered as a broodmare following two credible runs in the G3 Quezette Stakes and Listed Atlantic Jewel

• Military Men – 3YO gelding 1/2 brother to G1 ATC Oaks winner Unforgotten, that has had two starts to date for the Chris Waller stable

• Nothing Compares – 5YO black-type performed mare in work with Matt Dale, a winner three starts ago and 3rd last start

• Saasmit – 3YO Shalaa filly that’s a winner from four starts and a from the family of Brave Anna, Hit It A Bomb and Lahinch

• Toronado nomination – offered unreserved by Swettenahm Stud, this is the last opportunity to access a nomination to the son of High Chaparral, the sire of seven Stakes winners to date, headlined by G1 winner Masked Crusader

• Toyetic – 4YO Sebring gelding that’s a full brother to G2 winners Seaburge and Catch a Fire, a winner at Sandown from eight starts

• Wanalirri – 4YO mare who is a winner at Caulfield and placed in the G3 Alexandra Stakes earlier this year, from the family of Darci Brahma, Ethereal and Howard Be Thy Name

Inglis Digital graduates have already chalked up 282 individual wins just over a month into the new season, with 1,636 winners this calendar year.