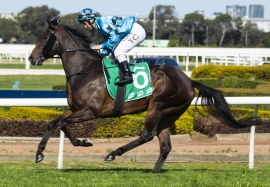 Outstanding race filly Fundamentalist (Not A Single Doubt) – in foal to Zoustar - is among the latest wildcard entries confirmed for The Chairman’s Sale.

The magnificent filly – G1-placed on five separate occasions - proved herself one of the stars of her generation, competing ferociously at the top level time and again, not only against her own age group but also in open company.

During her 3YO season of 2018/19, Fundamentalist placed four times at G1 level, three of which (Thousand Guineas, Surround Stakes and Randwick Guineas) were by a margin of a head or less.

She also finished a close-up third behind The Autumn Sun and Zousain in the G1 JJ Atkins as a 2YO.

Arguably her most memorable performance was her narrow second behind The Autumn Sun in the Randwick Guineas, when the champion colt came from an unimaginable position, requiring every last ounce of his stardom to run down Fundamentalist in the last stride, with the likes of Nakeeta Jane, Vegadaze, Madison County and Miss Fabulass in arrears.

During a stellar racetrack career, Fundamentalist finished in the top three at 13 of her 22 starts, defeating the likes of Fifty Stars, Unforgotten, Aloisia, Alizee, Land Of Plenty, Oohood, Seabrook, Invincibella, Kenedna, I Am A Star etc.

She was retired as a relatively lightly-raced prospect and has tested positive to Widden Stud’s Zoustar at her first covering.

Part-owner Wes Heritage described Fundamentalist as “a mighty mare who took us on the ride of a lifetime’’.

“She was so much fun to race, just a group of mates who have been on a journey around Australia with her contesting Stakes races in Sydney, Melbourne, Brisbane and Adelaide but not everybody involved in her are breeders so the time has come to dissolve the partnership,’’ Heritage said.

“She was as tough as they come on the track, she’s gone to the breeding barn without having been over-raced, she’s by a great stallion in Not A Single Doubt and I have no doubt she’s going to prove an absolutely outstanding broodmare prospect for her lucky new owner.’’

Fundamentalist joins other recent wildcard entries which include the likes of G1 winner Youngstar, classy 2YO Bella Rosa and Summer Surf - a half-sister to G1 Golden Slipper winner Farnan - who is carrying a maiden foal to exciting Aquis-based first season sire Brave Smash.

Applications for a Wildcard spot in The Chairman’s Sale will be accepted up until 5pm on Friday April 24.

To submit a wildcard entry, please contact a member of the Inglis Bloodstock Team or CLICK HERE.

The Chairman’s Sale already features a collection of broodmares and breeding prospects of incredible quality.

Already confirmed in the main catalogue are the likes of G1 winners In Her Time, Unforgotten and Booker, Cleanup - the dam of recent G1 Doncaster Mile winner Nettoyer – in foal to The Autumn Sun, G2 winner and G1-placed mare Noire, Admirable – dam of dual G1 winner Vega Magic – in foal to Exceed And Excel, G2-winning Hinchinbrook mare Samara Dancer (in foal to freshman sire Trapeze Artist) and dual Stakes winners such as Sprightly Lass (in foal to Pierro), Sword Of Light (in foal to Fastnet Rock), Lubiton (in foal to I Am Invincible) and Meryl.

The Chairman’s Sale will take the format of a Virtual Auction with online and telephone bidding, just as last week’s Easter Yearling Sale did.

Details for bidding registration and inspection locations for catalogued mares will be released in the coming days.

The online sale coverage will again be accompanied by a Sale Day Live broadcast hosted by Caroline Searcy.

The sale will begin at 3pm on Friday May 8 at inglis.com.au, with a 30-minute preview show to commence online at 2.30pm.