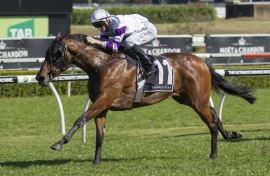 It was appropriate in the week the state's imminent greyhound ban was reversed, Garry Frazer won at Randwick.

And then had the chance to dash across town to watch a pup he owns run in the heats of a group 1 classic at Wentworth Park.

Few boast the talent Frazer has with horses. Even fewer boast a career so diverse. Told several decades ago he needed to exercise more after being diagnosed with sugar diabetes, Frazer decided to train a few greyhounds. He still has a licence, but his numbers never top more than one or two.

His equine team is not much bigger. Like so many on the periphery in a market dominated by the uber big stables, Frazer makes most of his crust from pre-training and putting the polish on a number who have gone on to win group 1 races.

But when he gets his hands on one of his own to train? They never seem to disappoint. And there was another case in point as the Sydney spring carnival wound to a close.

"I've had a huge rap on her, but how can you be overconfident against the colts? Jordan, my son, rode her on Tuesday and said, 'they won't be beating this'," Frazer said after Spright​ sailed to victory in the listed three-year-olds sprint on Saturday. "He was right. And he was right first-up too."

As stallion prospects sauntered around the mounting yard before the Brian Crowley Stakes, Frazer just had a quick chat with his jockey Jason Collett. No fuss. No fanfare. Just the way Frazer likes it.

"I think she was just immature more than anything else [as a two-year-old]," Frazer shrugged. "She's now 40 kilos heavier. Her brother [Way We Go] broke down and he's half-way back now. He was going to be a group horse for sure. He bowed a tendon and he had a scan last week and it looks good."

But maybe not as good as the future for Spright, likely to head to Flemington on Oaks day. Allowed to find her feet back in the field, Spright came with a rush to mow down the leaders and scored from Star Of Monsoon by a length with a half neck back to Faraway Town in third.

"That was really impressive," Collett said. "It was run to suit us, but she put them away pretty comfortably. That maiden was impressive [at Rosehill] and to step up again here was good.

"[Frazer] just leaves it to me and says, 'ride them how you ride them'. It worked out pretty well."

Collett chalked up a stakes race-to-race double after Egyptian Symbol ambled to victory in the group 3 Nivison when resuming for Bjorn Baker. The heavily-backed favourite camped on speed and sped clear at the furlong pole to beat Artistry and Rule The River.

"She was pretty impressive and I ended up getting the right run in the race," Collett said. "It was slowly run and her turn of foot was pretty brilliant when I let her go.

"She could well be [a group 1 horse this preparation]. She was racing against group 1 horses last preparation in Japonisme​ and Counterattack and she possibly just come to the end of that [campaign] and with a cover she will be better."