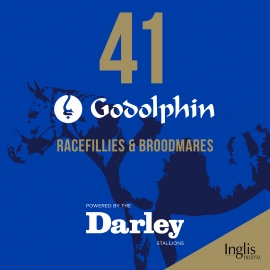 An impressive Inglis Digital catalogue of 570 lots headlined by Melbourne Gold yearlings and 41 Godolphin mares has opened for bidding this afternoon, presenting another extraordinary opportunity for buyers.

The July (Early) Online Sale catalogue starts with the Melbourne Gold Yearlings reflecting the original lot order, followed by Godolphin race fillies and broodmares from lot 471 - 511 and then remaining categories as per the usual Inglis Digital sale order.

Gold yearlings were moved to the July (Early) Online Sale on Monday, following the official border closure between New South Wales and Victoria.

Extensive information will be available for the Gold Yearlings including video and photographs, while a schedule detailing the location of all yearlings for private inspections will be made available shortly.

Inglis Bloodstock agents will also be inspecting the Godolphin draft and the majority of Gold yearlings in the coming days and will be available for consultation.

She has already produced three winners from all three foals to race to date and is offered in foal to Frosted.

There are also siblings to the likes of Furnaces, Hauraki, Kidnapped, Soul and Etymology, plus 28 pregnant mares and daughters of Exceed and Excel, Commands, Medaglia d’Oro, Sebring, Bernardini and Canny Lad.

Godolphin have an impressive record in selling top-producing broodmares, with the dam’s of Microphone, Lyre, Happy Clapper, Sepoy, Long John, Tenley and Appearance all sold at public auction.

Godolphin’s draft is available for inspection by appointment at their Northwood Park property on Saturday July 11, Monday July 13 and Tuesday July 14 between 10am – 2pm.

An online booklet with links to parade videos and detailed information on each mare is available HERE.

Other highlights in the Inglis Digital catalogue include:

• Coat Of Arms – 2YO colt by I Am Invincible out of Varenna Miss, offered by Newgate (as agent)

• Euryale – Stakes winning Lonhro mare from family of Danglissa, both her raced progeny are winners and she’s offered in foal to Invader

• Faretti – 3YO Sydney Metro winner by I Am Invincible, 1.4L 4th in the Listed Brian Crowley Stakes

• Feeling Positive – Not a Single Doubt half sister to Combat Kitty and Mitraad, offered by Burnewang North Pastoral in foal to Deep Field

• Nanda Kot – dam of G1 performer Kumaon and Hong Kong galloper Amazing Chocolate, she has produced five winners from six to race and is offered in foal to Santos

Plus, pinhooks such as the Animal Kingdom x Menage a Charge filly sold as a weanling in the 2019 Scone Online Sale for $7,500, which realised $42,000 at Sunday’s Scone Yearling Sale.