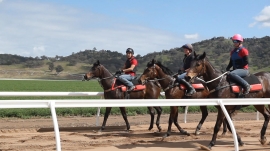 Gooree Park Stud is the world-class result of Eduardo Cojuangco’s agricultural ambitions and the stud will offer 75 broodmares, yearlings and racing stock in May across the Inglis Australian Broodmare and Weanling Sale, the Classic Yearling Sale (Book Two) and the Autumn Thoroughbred Sale.

Located on one of Mudgee’s most historic and fertile properties, Gooree has produced top-class racehorses since its inception. The most recent of these outstanding athletes is Saturday’s Group 1 ATC Champagne Stakes winner Prized Icon.

Prized Icon’s impressive performance, which was off the back of a Listed Fernhill Stakes win a week earlier, has bolstered the pedigree of his half-sister Tarlaquena, which will be offered as Lot 224 in the Broodmare and Weanling Sale, to be held on 1, 2, 3 and 4 May.

Hailing from the family of multiple Group 1-winning mare Princess Talaria, Tarlaquena has produced Group 1 BRC TJ Smith runner up Kabayan, and a daughter by Northern Meteor, Heredera that will be offered as Lot 234. A further five mares (Lots 235, 238, 239, 842, 851) are from this family made famous by Gooree. The stud will offer another ten broodmares by Gooree’s late homebred sire Northern Meteor, whose magnificent ability as a stallion was showcased and clearly evident from the feats of only four crops.

Taralquena and Heredera are among Gooree’s 47 broodmares featured in the sale. They join three close relations to Group 1 winning first season sire Your Song, along with a full sister to recent Group 1 winner Speak Fondly, plus four other entries from the family of the Flight Stakes winner.

Evening Glitter (Lot 232) and her daughter Starlight Heaven (Lot 839) are from the family of recent stakeswinners Attention and Tempt Me Not, while the illustrious Dancing Show family is represented by Jamil (Lot 240) and a two-year-old filly out of Emblem Of Hope (Lot 231).

In addition to their entries in the Inglis Australian Broodmare and Weanling Sale, Gooree Park Stud will offer 16 yearlings in Book Two of the Inglis Classic Yearling Sale on Friday 6 May, and six two-year-olds, six three-year-olds and two well-performed geldings in the Autumn Thoroughbred Sale that will follow that afternoon.

In Classic Book Two are Lots 10 and 76, a filly and a colt out of Group-winning half-sisters Beauty Watch and Precious Glitter. They will be joined by yearlings sired by Exceed And Excel, High Chaparral, Bel Esprit, Smart Missile, Your Song, Swift Alliance, Haradasun, Dreamscape and Don Eduardo. These yearling’s also hail from the female families of Group 1 winners Desert War, Romantic Touch and Barathea.

Gooree Park Stud is just one of a multitude of vendors taking advantage of the first opportunity to sell their premium bloodstock in the first week of May, with the Inglis Broodmare and Weanling Sale also featuring reductions and dispersals from Bell View Park Stud, Bell River Thoroughbreds and Think Big Stud.