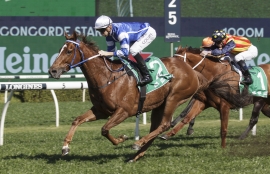 Nicknamed the Giant Killer for his reputation of causing upsets over the best sprinters in the land, Gytrash (Lope de Vega x Miss Barley) was at it again today, lowering the colours of odds-on favourite and the world’s best sprinter Nature Strip (Premier Yearling Sale) to surge into Everest calculations.

He led in an Inglis graduates’ trifecta, with Dirty Work (Easter Yearling Sale) in third.

Gytrash (pictured) will represent Inglis in The Everest at Randwick on October 17.

It was an emotional win for trainer Gordon Richards, who described Gytrash as “the horse of a lifetime’’.

“I don’t really get nervous or emotional or celebrate wins much, but knowing what’s on the line this preparation and knowing what we have been offered by Inglis to be involved with, this is probably the most ecstatic moment I’ve ever had on a racetrack, probably even more so than when he won the Lightning because we all know what lies ahead the next six weeks with the Everest,’’ Richards said.

“I know Nature Strip was odds on and he’s a bloody good horse, maybe the best sprinter in the world, but we got him today and it’s going to be an amazing spring as the build up to the Everest continues.

“I’m not sure what I’ll do with the horse next. I’ll make my mind up on Monday I think but at this stage, I might send him to a farm for 10 days, give him a breather and some time on the water walker, then go straight into the Everest.

“The horse has pulled up great which is the most important thing so I’ll sleep on it for a night or two and then make a call on that.

“Today has been amazing, we’ve got some of the horse’s owners here from around Australia, Inglis has been amazing in looking after us and it’s really great to be able to pay them back at least a little bit with this win and hopefully there’s plenty more to come in mid-October.’’

Richards purchased Gytrash for $40,000 from the Maluka Thoroughbreds draft at the 2015 Premier Yearling Sale.

Two races later at Randwick Dame Giselle (I Am Invincible x Ballet Society) asserted herself the standout 3YO filly of her generation with another strong win in the G2 Furious Stakes, the second leg of the Princess Series.

Her win came a fortnight after she claimed the first leg of the series in the Silver Shadow Stakes.

She will now proceed to the next leg, the Tea Rose Stakes, in the lead-up to the G1 Flight Stakes at Randwick on Epsom Day.

Trained by Peter and Paul Snowden, Dame Giselle is a $500,000 Easter Yearling Sale buy for Go Bloodstock, from the Sledmere Stud draft.

And Dreamforce made it back-to-back wins in the G2 Tramway Handicap with a tough all-the-way victory for trainer John Thompson.

It was a 13th career win for the Easter Yearling Sale offering of Kitchwin Hills and took his career earnings to $2.3m.

He will now likely target the G1 double of the George Main Stakes and Epsom Handicap.

The Inglis Digital pin-up girl was having her first run since claiming her maiden G1 in the Sangster Stakes back in May, when she became the first G1 winner for the Inglis Digital online platform.

Part-owner John Kelton purchased the now 6YO mare for $22,500 at the April 2019 Online Auction, where she was offered by Glenn Haven Farm.

Since then, the Will Clarken-trained Bella Vella has raced 12 times for 7 wins and in excess of $600,000 in prizemoney.