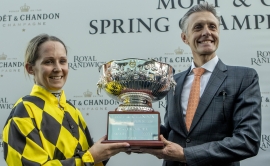 The 3YO filly Maid Of Heaven today became the first Group 1 winner sold out of the popular Gold Riband session of the Inglis Classic Yearling Sale.

Maid Of Heaven proved too strong in the Group 1 Spring Champion Stakes at Randwick, joining fellow Inglis Classic graduate Yankee Rose as the only fillies in history to win the race.

It was also the first Group 1 win for trainer Mark Newnham and jockey Rachel King (pictured).

Maid Of Heaven (Smart Missile x St. Therese) was one of 60 yearlings catalogued in the inaugural Gold Riband session in 2017.

She was offered by Arrowfield Stud and purchased for $60,000 by Dean Hawthorne Bloodstock.

“The concept proved an instant success last year with buyers and vendors and again this year at Riverside,’’ D’Arcy said.

“Offers for the 2019 yearling sales season are currently with vendors and I can say the quality of next year’s Gold Riband session especially – which will kick start the season on Saturday February 9 at Riverside – is exceptional yet again.’’

Maid Of Heaven was another success story from Arrowfield Stud’s offerings of 2017.

Wild Planet is now a Stakes winner at just his sixth start.

He was purchased by his trainers and Andy Williams for $280,000.

The Steve O’Dea-trained 3YO colt came from a long last to eventually score a comfortable victory in the feature, which has turned into somewhat of a stallion-making race in recent times.

Sesar was a $160,000 Australian Easter Yearling Sale buy for his trainer and Proven Thoroughbreds, from the Southern Cross Breeders draft.

His win was also a great result for his dam Sarthemare, a former Inglis Classic yearling and Black Opal Stakes winner-turned-broodmare ($12,000 buy in 2007), who produced two winners on the day including Sesar, her first Stakes winner.

Both her winners – Sesar and Doubt Defying – were bred by Howard Blight.

Darren Weir appears to have the Victorian Derby at his mercy with Extra Brut (Domesday) following his impressive win in today’s Listed UCI Stakes at Flemington.

Extra Brut is another pinhook success for Gary Mudgway and Grange Thoroughbreds.

Mudgway bought Extra Brut for $52,000 off Stonehouse Thoroughbreds at the Inglis Great Southern Sale before on selling him to Spicer Thoroughbreds for $100,000 at Inglis Classic.

And mares I Am Serious (Choisir) and Eckstein (I Am Invincible) scored comfortable Stakes victories for their connections today.

I Am Serious – a $30,000 Inglis Easter graduate where she was offered by Holbrook Thoroughbreds – proved too strong in the Group 3 Angst Stakes at Randwick, earning herself a first Stakes victory.

And Eckstein proved she was on track to avenge her narrow defeat in last year’s Myer Classic on Derby Day with a dominant victory in today’s Listed Paris Lane Stakes at Flemington.

Trained in Goulburn by Kurt Goldman, Eckstein was a $50,000 buy for KP Thoroughbreds from Redbank North at the 2014 Australian Broodmare and Weanling Sale.