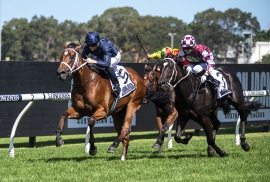 A plethora of autumn G1 races are at the forefront of connections’ minds of the five Inglis-sold Stakes winners across Australia and New Zealand today.

Strong 2YO colt Home Affairs (I Am Invincible) led the way, booking a Golden Slipper berth with a tough win in the G2 Silver Slipper at Rosehill.

It was a huge result for Waller as well as Home Affairs’ owners - a large syndication of major international and domestic owners led by Coolmore - who purchased the colt at last year’s ‘virtual’ Easter Yearling Sale for $875,000 from Torryburn Stud, who also bred the colt.

The win was an extra significant one for Torryburn, who will offer Home Affairs’ Capitalist half brother at April’s Easter Yearling Sale as lot 428.

Torryburn’s Mel Copelin said: “It’s a huge result for the farm. He was always an incredible specimen of a horse, very strong, he blew everyone away by his physique and quite bomb proof in the prep and it’s now so good to see him winning these races so early on.

“The virtual Easter auction was nerve-wracking for everyone involved but Inglis did such an amazing job to get the sale up at the time and we’re thrilled.

“The Capitalist half coming to Easter this year, he’s just as good, the perfect model of a yearling and a racehorse. He’s from a different sire but physically the same, a forward and early type.’’

Torryburn – synonymous with Easter success – has a draft of eight yearlings at this year’s Easter Sale at Riverside on April 6 and 7.

“He has always shown a huge amount of ability and we expect him to be even better on top of the ground,’’ a thrilled Magnier said.

“We must thank Chris Waller and his team for managing him perfectly throughout. It is a massive thrill to win such a prestigious two-year-old race with a great group of owners from all over the world.’’

Home Affairs was one half of an interstate Stakes-winning double for Coolmore after smart filly Parure (Fastnet Rock) was successful in the G2 Autumn Classic at Caulfield.

The Ben Hayes and Tom Dabernig-trained 3YO will now be brought to Sydney for races such the G1 Vinery Stud Stakes and G1 Australian Oaks.

“Parure is a very progressive filly…she’s very well bred with Group 1 goals in the autumn and we’re thrilled for her part-owners and breeders the Murrays and the McLures,’’ Coolmore’s Racing Manager Rob Archibald said.

James Bester purchased Parure for $155,000 at the Premier Yearling Sale, where she was offered by Morning Rise Stud.

“It’s really exciting…she was really strong through the line so I don’t think 2000m will be an issue and even an Oaks would be an option, we’ve got lots of options for her now.

“She’s bred to get further, it’s an excellent result for a lot of people.’’

Rich Hips – a $130,000 purchase for trainers Busuttin racing, owners First Light Racing and leading bloodstock agent Paul Willetts, from the Woodside Park Stud draft – was resuming from a spell but proved too strong to secure herself a second consecutive Stakes success.

She will now likely be given her chance at G1 level in the Coolmore Classic at Rosehill on March 13.

Woodside Park has a 14-strong draft at next weekend’s Premier Yearling Sale, for which inspections begin at Oaklands on Monday.

For Sacramento, it was a third consecutive front-running win for the tough Gai Waterhouse and Adrian Bott-trained Pierro 4YO.

The win took Sacramento’s career earnings to almost $400,000 – he cost Paul Moroney just $160,000 from Supreme Thoroughbreds, who will offer 25 yearlings at next weekend’s Premier Sale.

And in New Zealand, talented 3YO Rocket Spade (Fastnet Rock) proved he was on track for the G1 NZ Derby with an impressive win in the traditional lead-up of the G2 Avondale Guineas at Ellerslie.

Such was the strength of the win, the colt firmed into a $3 chance with TAB for the Derby, to be run in a fortnight.

Rocket Spade, bred by Sun Kingdom, is a $425,000 Easter Yearling Sale buy for Wexford Stables and Hermitage Thoroughbreds, from the Tyreel Stud draft.