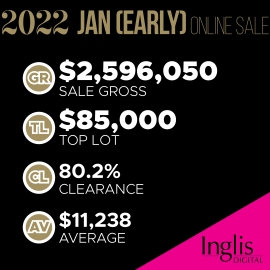 Trained on the Gold Coast by Lee Freedman, Higher won two barrier trials but after starting $1.40 on at his only race start, bucked and failed to finish.

But the horse’s undoubted ability was what lured A Value Consulting’s director Dr Lee to bid to $85,000 on behalf of Hong Kong clients to purchase Higher, a horse he believes can develop into a winner in dual jurisdictions.

“Higher will stay in Queensland to race with his original trainer Lee Freedman for now…and if he can have some good performances like I think he can, he may be imported to Hong Kong as a PP raced horse,’’ Dr Lee said.

“We are lucky that we have a good relationship with the original trainer Lee Freedman so we confirmed the horse is healthy to race and we are happy to keep the gelding with him in the stables he is familiar with.

“A Value Consulting Limited is always a big supporter of Inglis Digital and we have successfully imported many horses to Hong Kong from this sale. Most of them can win Hong Kong Class 3 and Class 4 races and Hong Kong owners are very pleased to get the horses from the digital sale and then have them perform well in Hong Kong so we will continue to support each upcoming sale.’’

Higher was one of two purchases for A Value Consulting, who also took home Kuroshio 3YO Early Crow – undefeated from his only start – for $70,000.

A pair of well-bred tried horses both realised $80,000 to be equal second top lots.

Unforgiven (Snitzel) – an Anthony and Sam Freedman-trained 3YO offered by James Harron – was secured by Peter Colley while Queensland trainer Steven O’Dea took home 4YO Captivare (I Am Invincible), which was offered by Chris Waller Racing on behalf of the horse’s ownership group.

The top three lots of today’s auction are all tried horses and their purchases come after an extraordinary 2021 on the track for Inglis Digital graduates, with over 2520 Australian races won by over 1600 individual graduates.

Colley – who bought three horses in todays’ January (Early) Sale, will decide in coming weeks who the new trainer of Unforgiven will be, with feature country and provincial races the preferred targets.

“He’s only raced six times and he’s won one and placed twice, including a third in town last week so he’s definitely got a future,’’ Colley said.

“It’s likely either Damien Lane or Warren Gavenlock will train the horse, we want to target Highways and the Kosciuszko and Country and Provincial Championships with these types of horses so hopefully he can step up for us.

“I liked his last two runs especially and they were over 1500m so he’s right in the hitting zone for the Country Champs etc.’’

O’Dea described Captivare as a style of horse he believed would reach Queensland Saturday grade in the future.

“He’s only won the one race but he’s been pretty consistent through his form so he’s a horse who should fit in really well up here,’’ the trainer said.

“He’s had four weeks off now and I’ll give him a bit longer yet because it’s obviously hot up here in Queensland at the moment so he can keep enjoying a break and we’ll get him into the stables next month at this stage.

“I’ll get some stable clients into him, I’ve got some clients who wanted to get an up-and-running horse so we thought Inglis Digital was the best place to go and source one and I’m really happy to have bought this fellow.’’

Entries are now open for the January (Late) Online Auction, which will run from January 21-26.