In Her Time latest star-studded entry for Chairman's Sale 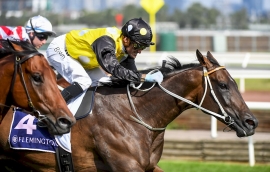 Multiple G1-winning mare In Her Time is the latest headline act confirmed for the 2020 Inglis Chairman’s Sale to be held at Riverside Stables on the evening of May 8th.

Owned by Orbis Bloodstock and Peter Brown, In Her Time has proven herself one of the best sprinting mares in Australia in recent seasons.

In a remarkable sign of her consistency, she has either won or placed in a G1 race every autumn or spring carnival since mid-2017.

In Her Time has won two G1 races – the 2019 Black Caviar Lightning and the 2018 The Galaxy – has been placed a further six times at G1 level (Stradbroke Hcp, TJ Smith Stakes, Manikato Stakes, Tatts Tiara and twice in the VRC Sprint Classic) and has won another four Stakes races.

During an illustrious racetrack career In Her Time has beaten the best sprinters in the land including the likes of Santa Ana Lane, Pierata, Redzel, Trapeze Artist, Brave Smash, Alizee, Sunlight, Kementari, Shoals, Global Glamour, English, Booker, Redkirk Warrior, Houtzen, Osborne Bulls and Written By among others.

She showed she was in for another big campaign with a strong trial performance at Wyong on Monday and will likely resume in the G1 The Galaxy at Rosehill on Golden Slipper Day, March 21.

“She’s a world-class sprinter and she’s proven that by competing against and defeating some of the highest-rated sprinters on the planet the past two to three years,’’ Orbis’ Paul King said.

“We took her to Hong Kong late last year and were confident that she was ready to produce a career best, but unfortunately she had to be withdrawn the day before due to a minor setback from which she has made a full recovery and proved that with a brilliant trial earlier this week.

“Races like The Galaxy, the TJ Smith and the Robert Sangster in Adelaide are on the agenda for the autumn all going well, while there are plenty of races for her in Brisbane subsequent to the sale date.’’

Part-owner and co-breeder Peter Brown, who has had a long-held association with In Her Time’s family via his association with Denise and John Cobcroft, added: “She is a marvellous mare and as good as any sprinter in the country at her best, as her form shows.

“She is the best runner from a family that has been producing quality speed horses for generations and the pedigree seems to get better every year, as seen with her close relative Yes Yes Yes coming into the page this year.’’

Inglis’ NSW Bloodstock Manager Chris Russell said: “In Her Time has been an extraordinary mare over a number of seasons and it is a privilege to be in a position to offer to market a mare of her quality.

“I saw her at Kris Lees’ stables a little over 12 months ago and she is a beautiful mare, so it’s really a very exciting and rare opportunity.

“The sale is shaping up to be something really special with the likes of In Her Time, Unforgotten and a host of other really appealing mares, so we are really looking forward to it.’’

The Chairman’s Sale, to be held at Riverside Stables on the evening of Friday May 8, will again be conducted under a 0% sales commission structure.

Not only did last year’s edition achieve the highest average ($422,455) and clearance rate (93%), it also produced the most expensive pregnant mare to sell at public auction in the southern hemisphere in 2019 in Maastricht, who sold to Coolmore and James Bester Bloodstock for $2,250,000, having been offered through the Newgate Consignment on behalf of owners Ananda Krishnan and Alan Bell.

Maastricht was one of two mares to sell for $2,000,000 or more at The Chairman’s Sale, with Tom Magnier purchasing multiple G1 winner Srikandi from the Kitchwin Hills draft for $2m.

At the conclusion of the 2019 breeding stock sales season, the Inglis Chairman’s Sale was responsible for three of the top four prices achieved for pregnant mares in Australasia at auction during the calendar year, while high-class race mare Aloisia sold for $1.2m to become a fourth $1m+ lot at the sale.

Entries for the 2020 Chairman’s Sale and the Australian Broodmare and Weanling Sale are closing soon.

Places in the Chairman’s Sale are limited, so interested parties are encouraged to download an entry form HERE or contact a member of the Inglis Bloodstock Team.