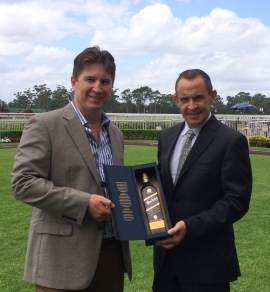 On the eve of the 2015 Inglis Classic Yearling Sale Summer Book star colt Brazen Beau, a second generation Classic Sale graduate, and his trainer Chris Waller have been honoured for their Group 1 triumph this season.

Brazen Beau (I Am Invincible x Sansadee), a $70,000 purchase from the draft of Murrulla Stud at the 2013 Inglis Classic Summer Book, won the Group 1 VRC Coolmore Stud Stakes at Flemington on Derby Day taking his prizemoney to $700,000, an incredible return on investment.

An engraved bottle of Johnnie Walker Blue along with Inglis memorabilia was presented to Chris Waller at Warwick Farm this afternoon by Inglis’ Managing Director Mark Webster.

“Chris Waller and his clients have been great supporters of the Inglis Classic Sale and we are delighted that they continue to get rewards on the racetracks without a huge outlay initially,” said Webster.

Waller trained Group 1 winners that were sourced from Inglis Classic include Pressday, Triple Honour and Brazen Beau, all purchased from the first or second crop of their respective sires for between $38,000 and $70,000.

“Brazen Beau is a stunning individual and it’s a great endorsement for Australian breeders to see Sheikh Mohammed’s Darley operation investing in a star colt like this,” said Waller.

Brazen Beau will continue to run into the Autumn and is bound for the King’s Stand Stakes at Royal Ascot in the European summer, before being retired to stud by Darley at their Northwood Park farm in Victoria.

I Am Invincible was Australian Champion First Season Sire for 2013/14 and on the back of his progeny’s continued outstanding results and overwhelming breeder support Yarraman Park Stud will increase his service fee to $50,000 + GST for the 2015 breeding season.

"He’s an incredible horse with the highest strike rate in Australia winners to runners including five stakes winners in his first crop, we couldn’t be more excited about him,” said Harry Mitchell.

There are 25 first season sires represented and I Am Invincible has 16 colts and 9 fillies on offer at the 2015 Inglis Classic Yearling Sale Summer Book starting at 12 noon this Sunday 8 February.

“The Classic sale is the perfect opportunity for the buyers to pick up the best Australian progeny by future leading sires, as has been done previously with Brazen Beau (I Am Invincible), Peggy Jean (Myboycharlie), Secret Admirer (Dubawi), Whobegotyou (Street Cry) and Choisir (Danehill Dancer),” Mr Webster said.