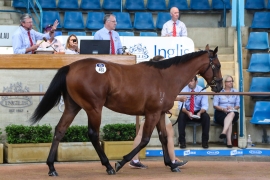 The record books were rewritten in Sydney this week with the 2015 Inglis Classic Yearling Sale Summer Book setting new benchmarks. The year on year average has risen 20 per cent, the median up 15 per cent and sale gross up an impressive 47 per cent, all at a record clearance rate of 86 per cent.

“We couldn’t be happier with the direction that Inglis Classic is heading. Vendors embraced the February timeslot with record entries and buyers have repaid that faith assembling in record numbers to purchase 86 per cent of lots offered,” said Inglis Managing Director Mark Webster.

“Vendors should now have greater confidence to support the Inglis Classic Sale with even better types next year,” Webster added.

CLICK HERE to view the InglisTV wrap of the 2015 Inglis Classic Summer Book.

Arrowfield Stud offered the final lot of the record breaking sale, with Lot 574 maintaining their 100% clearance record at an average of $79,958. Broadwater Farm, Widden Stud and Yarraman Park also grossed over $900,000 in sales this week.

Bell River Thoroughbreds, Fairview Park Stud, Ferndale Farm and Redbank North all averaged over $80,000 for their three or more lots sold, a great result for the smaller operations. A total of 45 vendors recorded a 100 per cent clearance rate at the 2015 Inglis Classic Summer Book.

Over 240 individual buyers have been successful at the 2015 Inglis Classic Yearling Sale Summer Book, the largest and most diverse buying bench to attend a Classic Sale. NSW buyers accounted for half of all sales, but had plenty of competition from successful buyers from VIC, QLD, SA, WA, ACT, New Zealand, Hong Kong, China and South Africa.

Thanks to Inglis’ Make-An-Offer Service the clearance rate from Days One and Two have risen to 89%, but there are still many top racing prospects available to interested parties.

GetRacing.com.au will be utilised by many syndicators to promote their Inglis Classic purchases over the coming weeks. New owners looking to start the journey into racehorse ownership via Syndication are encouraged to browse Australia’s greatest marketplace for racehorse shares at GetRacing.com.au

All yearlings offered at the sale are eligible for entry into the $5,000,000 Inglis Race Series covering their 2YO, 3YO and 4YO racing seasons. The series includes many new features, including the boosted $500,000 2YO Inglis Nursery on Villiers Day in December 2015. For more information go to inglis.com.au/races