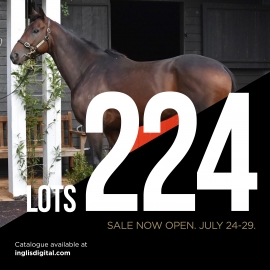 The Inglis Digital July (Late) Online Sale has opened for bidding with another intriguing catalogue of 224 lots, including 15 fillies and mares offered by Coolmore Stud (as agent).

Inglis Digital has enjoyed an incredible run of 18 successive sales to gross more than $1 million and follows on from a record $5.8 million gross in the July (Early) Sale, which included Melbourne Gold yearlings and Godolphin mares.

The July (Late) race fillies and broodmare section comprises of highlights such as:

• Schilldora – Stakes placed 4YO and a winner of four races including as a 2YO, offered by Richard Jolly Racing

• Mycup Runneth Over – Dam of Inglis 2YO Challenge winner Split, she’s by Encosta de Lago and her siblings have produced the likes of Savvy Nature, Addictive Nature and G1 NZ One Thousand Guineas winner Hasahalo

• Rotterdam – By Pierro and out of a full sister to Fastnet Rock, offered by Coolmore in foal to current leading first season sire Pride of Dubai

• Glowlamp – Multiple 2YO Stakes winner and G1 placed from the family of Rock of Gibralter, she’s dam of three winners and offered by Twin Hills Stud in foal to Odyssey Moon

• Oomaroo – Dam of G3 winner Mongolian Wolf and herself a half-sister to Thump, offered by Kingstar Farm

• Oregon Dreamer – A winner of four races for Busuttin Racing, out of a Zabeel daughter of dual G1 winner Maurine

• Hadavision – American Stakes winning mare that’s produced three winners from all foals to race, offered in foal to Lord of the Sky by Kingstar Farm

• Annandale – 3YO by Dundeel from the family of Zipping and Scorpion

• Silent Weekend – 2YO Headwater filly from a Stakes-winning family, offered by Vinery Stud

The catalogue also includes stakes performing gallopers Main Stage who also ran 5th in both the G1 Victoria Derby and the G1 ATC Derby, Irish G3-placed Would Be King and promising 2YO colts Urban Warrior, Navalha and Sharpshooter.