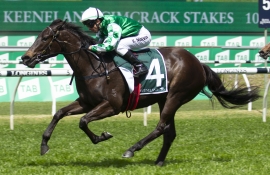 Three stakes-winning fillies by I Am Invincible top the betting for the inaugural running of the $2m Inglis Millennium as TAB launched the market for the race.

The 2019 Inglis Millennium will be the first running of the 1200m feature, restricted to graduates of Inglis’ 2018 Yearling Sales Series.

TAB's Thoroughbred Manager Sally Snow was delighted to have the opportunity to price the contenders.

“The Fixed Odds wagering team love a challenge and when Inglis approached us to price up a market for this exciting event, we were put to the test,” Snow said.

“We anticipate that a highly competitive field will be assembled come race day for the inaugural Inglis Millennium, especially with $2m in prizemoney and with the race open to all eligible Inglis yearling graduates.”

“The impressive Group 3 Gimcrack Stakes winner Catch Me (pictured) heads up the TAB Inglis Millennium market at $4.50 - a $625,000 purchase at the Easter Yearling Sale, she won by almost 3 lengths on debut coming from near last and we think she deserves favouritism at this point in time.”

Espaaniyah, winner of the Inglis Banner and Vinicunca, who claimed the Maribyrnong Plate are both rated $6 chances.

The three fillies between them have collected nearly $500,000 in prizemoney already.

“We are very excited at the prospect of a strong field being assembled for the inaugural running of the Inglis Millennium,” Hutch said.

“We are delighted to see Inglis and Tabcorp’s partnership work to innovate a market for the race.

“In terms of prizemoney, only the Golden Slipper is worth more and as a consequence all the leading stables across Australia are targeting the race.

“The likes of Mossfun, Extreme Choice and She Will Reign have recently used an Inglis race as a springboard to Group 1 2YO success.

“All at Inglis are very proud of the fact that it was the only auction house to offer any of Australia’s Group 1-winning 2YOs in 2018 for sale and on the early evidence, the Millennium looks set to be another fantastic showcase of the two-year-old talent sourced through the Inglis yearling sale series.

The Inglis Raceday, to be run at Warwick Farm on February 9 will also feature the $1m Inglis Sprint for 3YOs over 1200m.

Following the raceday, the first 120 lots of the 2019 Inglis Classic Yearling Sale will go under the hammer at Inglis’ Riverside Stables complex.

63 of these horses form the exclusive Gold Riband session, selected specifically from the catalogue as horses that present as Millennium and Golden Slipper type horses for the following year.

To view the catalogue for the 2019 Classic Yearling Sale, CLICK HERE.

To view the catalogue for the 2019 Melbourne Premier Yearling Sale, CLICK HERE.

To view the market for the race, CLICK HERE.