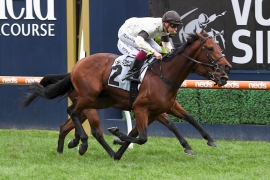 A mare Susan Keating purchased for just $19,000 at the Sydney Broodmare Sale back in 2009 today produced the winner of the $855,000 The Showdown as Khoekhoe (Turffontein) charged late to claim the 2YO feature.

Keating couldn’t resist buying Walvis Bay 11 years ago when she spotted her at the Newmarket complex.

The mare has had eight foals, all who have raced and all who have won, but the family has a new star attraction with Khoekhoe, a feature race winner at just his third career start.

“She’s a great mare. I couldn’t take my eyes off her when I saw her,’’ Keating said of Walvis Bay.

“She’s been a quality producer too.

“I remember foaling down Khoekhoe, he was outstanding right from the get-go, always a striking foal, weanling and yearling.

“A lot of credit must go to Dan Nevill from Hollylodge who prepped this horse for sale for me. He does a great job both with the horses and in putting up with me.’’

Today he could barely believe the colt had won a scheduled $1m race at just his third start.

“You dream of a horse like this, he’s very exciting to have,’’ Cumani said.

“We put a lot of work into finding good value horses. He had a great pedigree – no black type but lots of winners – and was just a real standout horse at the sales for us.

“We were thrilled to get him.’’

Khoekhoe has won two of his three starts for almost $500,000 in prizemoney.

He was one of several Inglis graduates successful in feature races Australia-wide today.

At Randwick mighty filly Rubisaki made it six wins on the trot with another impressive performance in the G3 JHB Carr Stakes.

It took her career record to 8 wins from 10 starts – with two seconds – and prizemoney of more than $1.1m.

Joe O’Neill of Prime Thoroughbreds purchased Rubisaki for $85,000 at the Classic Yearling Sale off Ian Smith’s Edinburgh Park, who also bred the filly.

Today’s win made it six wins from six outings this preparation for Rubisaki, including the $1m Inglis Sprint in February.

Later in the program Greyworm (Master Of Design) proved another shining light for the Inglis Digital Online Sales platform with an all-the-way win in the G3 Hall Mark Stakes.

Trained by Team Hawkes, Greyworm is a $110,000 buy from the January 2018 Online Auction when purchased as an unraced 3YO.

The Chairman’s Sale on Friday May 8 will take the format of a Virtual Auction with online and telephone bidding, just as last week’s Easter Yearling Sale did.

The online sale coverage will again be accompanied by a Sale Day Live broadcast hosted by Caroline Searcy.

The sale will begin at 3pm on Friday May 8 at inglis.com.au, with a 30-minute preview show to commence online at 2.30pm.

To view the Chairman’s Sale catalogue, including Wildcards that have been confirmed to this point, CLICK HERE.

Meanwhile in Adelaide Gytrash (Lope De Vega) made it an eighth career victory when proving too strong in the G3 Irwin Stakes at Morphettville.

The 4YO has been a model of consistency – in 18 career starts he has finished in the top three on 17 occasions and also earned more than $1.1m in prizemoney.

His trainer Gordon Richards purchased him for $40,000 at the Premier Yearling Sale, where he was offered by Maluka Thoroughbreds.

Gytrash was originally purchased for $70,000 as a weanling by John Corcoran at the Great Southern Sale, where Glastonbury Farms offered him.

There are two mares with extremely rare pregnancies to Lope De Vega heading to The Chairman’s Sale on May 8, lot 30 Baileya (Cacique) and lot 40 Grey Queen (More Than Ready).