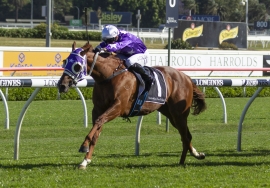 Kubrick scored a comprehensive victory in the inaugural $1m Bondi Stakes at Randwick, Castelvecchio ran a gallant second in the Cox Plate and Blue Gum Farm had a day to savour.

That was the fallout of a big day of G1 racing on the eastern seaboard today as Inglis graduates again rose to the fore.

In Sydney, the Premier Yearling Sale graduate Kubrick (Shooting To Win) scored a dominant albeit heart-stopping win in the day’s feature, the Bondi Stakes.

Jockey Brenton Avdulla – who rode In Her Time in the Inglis slot in last week’s The Everest - gave backers and connections a nervous ride but took a narrow opening at the 250m to sneak along the fence and career away for a big win.

“What a thrill and what a masterful ride by Brenton, even if it was a little bit hairy there at one point,’’ Denise Martin, whose Star Thoroughbreds purchased Kubrick for $250,000 at last year’s Premier Sale, said.

“He was always a lovely colt and he thoroughly deserved to win a big race like this today.

“Henry Plumptre was helping me with my yearling selections in Melbourne last year and he obviously had a lot to do with Shooting To Win from his days at Godolphin and he told me he had found a beautiful Shooting To Win colt at the sale and as soon as I saw him, I knew I wanted him, but he was very popular at the sales so it was nice to take him home.’’

Kubrick (pictured), who has now won more than $800,000 in prizemoney, was offered at Premier by Ross Ferris’ Two Bays Farm, who also bred the colt.

“He was always the horse with the determination and character to run through brick walls and he had to basically do that today,’’ Ferris said.

“It’s a great thrill for the farm, for Denise and for the family.’’

Meanwhile at Moonee Valley fellow Victorian breeders Blue Gum Farm had a day to remember, producing three Stakes winners on the program, two of which owners Phil and Patti Campbell bred themselves.

Having sold the Inglis Banner winner Ideas Man to kick-start the program, Blue Gum also produced La Falaise (G2 Fillies Classic) and Sartorial Splendor (G3 1300 Australia Stakes) in what has been “an absolute banner day for the farm’’.

“We won the Derby and Maribyrnong Plate on the same day in 1986 with the best 3YO and 2YO at the time but that aside, I can’t remember a day like this,’’ Blue Gum’s Phil Campbell said.

“To have three Stakes winners on a day like this, one the biggest days of racing in Australia, it’s one to cherish. We’ve had a fabulous time watching it all unfold.’’

The Henry Dwyer-trained La Falaise (Canford Cliffs) surprised even the official on-course judges when dead-heating for first in the G2 Fillies Classic.

At the competition of the race, the judge posted the Ciaron Maher and David Eustace-trained Fascino as the winner, before the official photo showed the wasn’t a margin between the two 3YO fillies.

Bred by the Campbells, La Falaise is a $5000 VOBIS Gold Yearling Sale buy for Forest Lodge Racing, from the Blue Gum Farm draft.

Fresh from debutant Ideas Man winning the Listed $500,000 Inglis Banner earlier in the day, Sartorial Splendor made it two for Brazen Beau when scoring his first black-type victory.

The results takes the number of 3YO Inglis Stakes-winning graduates in Australia this season to 20.

And Greyworm (Master of Design) gave the Inglis Digital Online Auctions another metropolitan winner when he was victorious at Randwick.

The current online auction opened yesterday, with the final countdown of bidding to begin from 3pm this coming Wednesday (October 30).

To view the October (late) online catalogue or to register to bid, CLICK HERE.