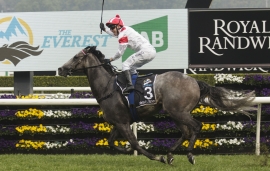 There were tears at Randwick and tears at Tyreel Stud as superstar grey Classique Legend (Not A Single Doubt) raced his way into equine stardom with a barnstorming victory in the $15m The Everest.

A one-time Classic sale-topper at $400,000 for long-time Inglis client Bon Ho, Classique Legend showed the racing world what trainer Les Bridge, co-purchaser Carmel Size and breeders Linda and Laurence Monds had known for the best part of three years – that he’s got the X Factor that makes him better than the rest.

Bon Ho, who owned the slot that Classique Legend raced in, was forced to watch today’s race in Hong Kong due to travel restrictions and border closures, but was thrilled to see his star race away with the win.

“He’s something else. He’s got a very, very good finish and he’s a very fast sprinter,’’ Mr Ho said.

“We are all very happy with the result. Mr Bridge and Carmel Size have done an amazing job with the horse.

“He will come to Hong Kong now and race in the International Sprint in December. He will stay in Hong Kong after that but still race in different places, Dubai, even come back for next year’s The Everest. It’s very exciting.’’

For Linda Monds, it was a special day as she watched the race with her husband Laurence, her parents, her children and the Tyreel staff on the farm.

“I actually can’t believe it,’’ an emotional Monds said.

“I always believed this horse was worthy of a win like this but as we all know, it’s a game of luck and in these types of races especially you need the trainer to have the horse on point and wow, didn’t Les Bridge do that.

“Congratulations to Les, to Carmel Size and to Kerrin McEvoy. What a trio they are, what a horse he is and what an achievement to have our brand on an Everest winner.

“I don’t think I’ve ever seen my dad cry as much as I did today. It’s an extremely proud day for our family.’’

Size couldn’t hold back her tears post-race either.

She has spent “most of my awake hours these past seven months’’ with Classique Legend at Bridge’s Randwick stables, knowing just how good the sprinter was and wanting to make sure nothing went wrong.

“I just cannot tell you how much this horse means to me,’’ Size said.

“We’ve had this horse in the stables since 21st March. It’s been a very unorthodox preparation but what a marvel the horse is and what a marvel Les Bridge is.

“I really love this horse. I know I keep saying that but he is something else. He’s got some magic that other horses don’t have and I’m so proud of him today.

“He won that race with so much authority, he’s an absolute beast.’’

Richards will likely remain in Sydney with the sprinter and contest the $1m Yes Yes Yes Stakes at Rosehill on Golden Eagle Day, which carries a $750,000 bonus to the winner ($200,000 for 2nd and $100,000 for 3rd) should they have contested The Everest.

“It’s a big effort by the horse. I’m super proud, it’s been a bloody big eight weeks and to sit here now and let it sink in that we’ve run third in an Everest, it’s really something to be proud of and I am.’’