Leotie Win Cheered by Many 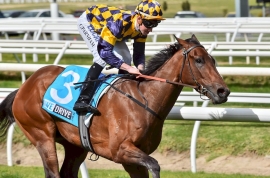 The open three year-old fillies event at Caulfield on Saturday was won in dominant fashion by exciting Darci Brahma filly Leotie, in whom there is much interest from varied parties.

An $80,000 Inglis Easter purchase for Rockmount / Randwick Bloodstock from the Bell View Park draft, the Henry Dwyer trained Leotie showed her class last start with a close second to I Am a Star in the Group III MRC Quezette Stakes.

She confirmed her potential in this 1400 metre assignment, travelling just behind the leaders before surging clear to win by a length and a quarter, her second win from four starts.

Leotie is entered for the Group I ATC Golden Rose (September 10) and it’s a lucrative option that may be taken up.

"I think I’d rather race her in a million dollar race in Sydney than a $200,000 race in Melbourne,” trainer Henry Dwyer.

"As long as it’s a decent track then we’ll probably go, I wouldn't want to go if it is going to be heavy though.

"She’s a really smart filly and getting her to 1400 (metres) certainly helped. Pedigree wise there’s no reason why she won’t get further.”

Bred and offered for sale by South Coast nursery Bell View Park, Leotie is bred to be good as a three-quarter sister-in-blood to multiple Group II placed stakes-winner Marianne and Group I SAJC Australasian Oaks runner-up Our Miss Jones.

"She’s still got a bit to learn but she was impressive enough today,” Dwyer said.

"The Thousand Guineas has been her aim all along but if she doesn’t get there so be it - we’ll certainly give her a chance anyway.”

Leotie is the first foal of stakes-placed High Chaparral (IRE) mare Prairie Star (NZ), who was sold as part of the Bell View Park Dispersal at the Inglis Broodmare Sale fetching $240,000 to the bid of Sun Stud with a positive test to Sebring.

Her 2015 colt by I Am Invincible was also sold with James Bester purchasing the youngster at MM National Weanling Sale for $150,000.

The current two year-old from Prairie Star, a colt by Street Cry (IRE) was bought by Baystone Farm as agent at Inglis Easter for $100,000. He will be re-offered at the Inglis Ready2Race Sale as Lot 61.

The progress of Leotie will no doubt be of keen interest to all parties who have purchased into this family, which may be on an upswing.

Marianne is due to foal this spring to I Am Invincible, while Our Miss Jones is due to All Too Hard.