Levendi to stand in Tasmania after topping Inglis Digital Sale 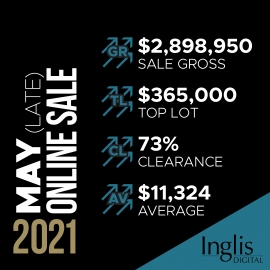 The Australian Derby winner Levendi (Pierro) will stand as a stallion in Tasmania after topping tonight’s Inglis Digital May (Late) Online Auction, selling to McShane Bank for $365,000.

The entire was purchased by Tasmanian trainer Brendan McShane, on behalf of a client, who will stand him at Broadmarsh in Tasmania.

McShane himself grew up around the breeding industry – his father Walter stood stallions since the early 1970s, his best being the 2013 Adelaide Cup winner Norsqui.

The family has been without a stallion for “the past 10 years or so’’ but is thrilled to be teaming up with the client to stand Levendi.

“We’re thrilled with the Sir Tristram line coming through to Lonhro and Pierro and now into this horse, we really think it’s a recipe for success.

“I’m still training in Tassie but I’m excited to be putting the skin back into the breeding industry. We’re proud to be back in the game, our property is moving into its ninth generation so the future looks bright.’’

Levendi was offered by GW Racing Bloodstock Pty Ltd, on behalf of the ownership syndicate.

GW Racing’s Manny Gelagotis said: “We’re excited about his stallion career and at the end of the day, it’s great to see another stallion standing in Tasmania.

“He’s the sort of horse that if he gets the right support, which I’m sure he will, I think he’ll be a star because he was bred to be a star, he was a star on the track, he’s a 2YO winner, a G1 winner, it all adds up.

“We’re really appreciative of Inglis, they’ve always been great to deal with and been great for the stable and they’ve been a tremendous help through all of this as per usual.’’

The May (Late) Sale ended with a gross of $2.9m, taking the monthly gross of the two Inglis Digital auctions to $5.3m.

The sale’s second top lot was the James Harron Bloodstock offering Emmalene, in foal to Pariah.

She was purchased by Marina Thoroughbreds for $175,000 and will be sent to Trapeze Artist later this year.

“She was a beautiful mare, an absolutely outstanding physical in foal to one of the most exciting young stallions in Australia in Pariah,’’ Harron said.

“She’s got a very exciting runner in King Kapa in Queensland at the moment and she’s already been a proven producer so the new owners will no doubt have a lot of fun with her and her progeny moving forward.

Pindara - offered by Springmount, in foal to Pierata – sold to Adrian Hall for $150,000 while Crambo Bloodstock secured Storm Siren – a half sister to Hong Kong champion Hot King Prawn – for $100,000.

Entries are now open for the June (Early) Online Sale, and will remain so until midnight next Wednesday, June 2.