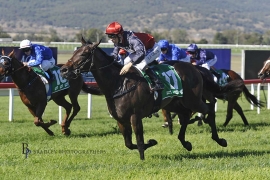 The sale of Manaya (Hinchinbrook) for $400,000 to Glenlogan Park has rounded out a record breaking Inglis Digital Online Auction for July.

The price achieved for the New Breed Racing-consigned racemare, a Stakes winner of seven races, eclipses the previous record of Set Goals who realised $321,000 as part of the June Online Auction.

“She is a mare I know very well having followed her over a number of seasons, so I am delighted to have bought her on behalf of Glenlogan Park,” agent Steve Morley said.

“She hasn’t enjoyed much in the way of luck and we think she is capable of improving her record further, so we will race her on and breed from her in 2020.”

“The Inglis Online platform has delivered a fantastic outcome for all associated with Manaya,” Costa said.

“We missed the traditional breeding stock sales in May and June, but the online auction gave us an opportunity to promote her in a manner that is just not possible through the private market.

“I could not be more complimentary of the process or of the work done by the team at Inglis.”

The sale of Manaya, along with a number of other private sales completed since the cessation of the auction, brings the gross for the July auction to $2,681,800.

Other highlights included the sales of Stakes-winning filly Kinky Boom (Spirit of Boom) and O’Reilly mare Guelder – in foal to Zoustar – selling for $150,000 each.

Manaya is one of 24 individual lots to have sold through Inglis Digital Online Auctions for $100,000 or more since 2018.

In response to recent successes and overall demand, the Inglis Digital Online Auctions will now occur twice per month.

“We are very grateful to Michael Costa and his owners for the opportunity to sell a mare of this quality and proud to have achieved a desirable outcome.

“Hopefully she will be lucky for Glenlogan Park, who have consistently been great supporters of Inglis.”

Entries will close at midnight this coming Wednesday, August 7, with the catalogue available at inglisdigital.com by 1pm Friday August 9.