May Sale ends with significant increases 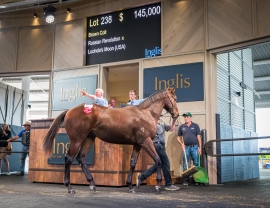 A colt purchased for just $18,000 at last year’s Great Southern Weanling Sale – held online due to Covid – has topped today’s second and final day of the HTBA May Yearling Sale at Riverside.

Lot 238, a Russian Revolution x Lucinda’s Moon colt offered by Kingstar Farm, sold to Bevan Smith Bloodstock and Singapore’s Kuldeep Singh Rajput for $145,000, eclipsing the Day 1 top price of $140,000 for a Capitalist colt, ensuring it ended as the overall sale-topper.

“The back story of the colt is that Matthew [Sandblom], the boss, bought him online through the Inglis Digital site for $18,000 and fortunately enough for the ladies who run his farm at Kiama (Hollymount Stud), Michelle [Harris] and Kristy [Marsh], the colt came home and they liked him and they said, ‘we’d like to buy half, Matthew’,’’ Kingstar’s Adam Cook explained.

“Once again it emphasises what sort of boss Matthew is.’’

Interestingly, the dam of the sale-topping colt, Lucinda’s Moon, will sell – in foal to popular young stallion Capitalist - as lot 449 at Sunday’s Australian Broodmare Sale at Riverside in the Toolooganvale Farm draft.

“He was very, very busy all week and he came through the prep with an amazing attitude, he didn’t turn a hair so I think that helped him reach the price that he did,’’ Cook continued.

“There has been a lot of buyers here over the last four or five days that you wouldn’t have seen at Scone so hats off to Inglis.

“Obviously, with the draft that we had, we had 13 yearlings so having the facilities here at Riverside to parade these horses in a good space, a good colt like he was, in a confined space at White Park maybe there wasn’t the opportunity to parade and show his strut off.’’

Smith said he had been trying to buy a Russian Revolution all year but it wasn’t until today that he was able to do so.

“And this guy I thought was one of the better ones I’d seen all year too,’’ Smith said of the colt, pictured.

“There’s lots of [Russian Revolution’s sire] Snitzel about this yearling. I thought he was a standout at this sale.

“When he walked in they asked me his valuation and I thought he was a $120,000 horse, I thought that’s what he would make at say a Classic Sale so yeah, we had to extend the budget.

“I’ve found this year that at just about every sale you’ve had to pay that extra 20-25% more. The market has shifted and we’ve just got to shift with it and stump up to pay for the right ones.’’

The equal leading buyers were Tim Martin as well as Teresa Bateup and partners with 10 purchases each, while Vinery Stud ended as leading vendor by aggregate (selling all 14 lots offered for $437,000) and Tyreel Stud by average, selling 3 from 3 at a $65,333 average.

“I think what we have witnessed these past two days is that the decision to rebrand and move this sale to Riverside as the HTBA May Yearling Sale has proven an absolute success,’’ Inglis Managing Director Mark Webster said.

“Taking last year out of the equation due to the changes resulting from Covid, if you compare the statistics of this sale from the 2019 Scone Sale, the average is up 21% and the gross is up 89% so from that perspective, we are very satisfied.

“The gross has exceeded $5m and the clearance rate of 81% will continue to climb as my team works with vendors the next few days especially to get as many passed in lots sold but to already be in the 80s is pleasing.’’

To enquire about a passed in lot from the HTBA May Yearling Sale, contact Harry Bailey from the Inglis bloodstock team on 0420 997 417.

Attention now switches to the Australian Weanling Sale, which is being held at Riverside from 10am this coming Thursday, May 6.

The weanling sale sees 264 lots catalogued in what once again represents a catalogue filled with opportunities for pinhookers and end users.

Not only are the tried and proven stallions such as Capitalist, Snitzel, Written Tycoon, Exceed And Excel, Fastnet Rock, Pierro, Lord Kanaloa, Deep Field, Shalaa, So You Think, Extreme Choice, Flying Artie etc all represented, but it’s also the first opportunity to purchase from what looks to be a stunning crop of first season sires.

From the first foals of the undefeated Triple Crown winner Justify to those of four-time G1 winner Trapeze Artist, Australian Guineas and Makybe Diva Stakes victor Grunt, G1 Blue Diamond winner Written By, as well as the likes of international superstars Harry Angel, Saxon Warrior and Mendelssohn etc, it is sure to present buyers with unlimited opportunities to purchase a weanling to syndicate, race or onsell.

Inspections for the Australian Weanling Sale continue tomorrow and Wednesday ahead of Thursday’s auction.

It will then be the undoubted highlight of the week – the Chairman’s Sale – on Friday evening as 66 stunning mares and stallion shares are offered in what is shaping as the sales’ event of the year.

Flanked by a cocktail party, live music and casino-themed entertainment at Riverside, a spectacular Chairman’s catalogue including the likes of G1 winners Pippie, Nettoyer, Celebrity Queen, In Her Time (IF to I Am Invincible), El Dorado Dreaming, Danzdanzdance, multiple G1 producers, Stakes winners, a half sister to champion mare Winx and two lifetime breeding shares in popular young Newgate stallion Extreme Choice will be offered from 5.30pm.

Inspections of the Chairman’s mares begin tomorrow, Wednesday May 5.

The week-long series of auctions concludes with the Australian Broodmare Sale on Sunday May 9.