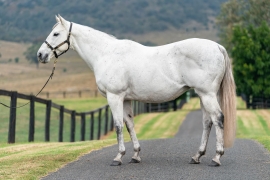 Members Joy (Hussonet) has become the most expensive pregnant mare sold online in the Southern Hemisphere, fetching an incredible $800,000 in the Inglis Digital June (Early) Online Sale, which concluded with three mares realising $300,000 or more and $5.25 million in turnover this evening.

The dam of dual G2 winner Pure Elation was purchased by Shen You Holdings, a Hong Kong Equine Investment Group led by Josiah Ma, who has been active on mares and stallion shares already this winter.

“There was extraordinary interest in her from most of the main players,” said Peter O’Brien of Segenhoe Stud, who offered the mare in foal to Zoustar.

“Josiah called me during the week and I gave him a rundown of the mare and highly recommended her, because I adore her.

"I didn’t think he’d be in that ballpark, but it’s a new group of investors that have been trying to buy a big ticket mare over the last few months and they raised their sights for her.

“There was no desperation to sell Members Joy but the mare sales have been so strong so we thought we’d try something different in terms of offering a mare of her quality on Inglis Digital, knowing she would stand out like a beacon.

“It surprised me the level of interest, it’s clear a lot of people have missed out on mares at the live sales."

5YO mare Street Icon (Street Boss) – a half sister to Bons Away – was the second top lot of the sale at $355,000, following a drawn-out bidding war between several parties.

The Group-performed mare was secured by Adam Mackrell’s Bell View Park Stud, who will look for a suitable stallion for her this coming season before re-offering her in 2022.

“I’m happy to pay the money for these sorts of mares, especially after attending the breeding stock sales including Chairman’s and seeing mares with similar records making at least that amount,” Mackrell said.

“It’s been well documented how hot the market is but to be fair Street Icon is by a top stallion, she’s from a very good family that looks to have upside and is a multiple Stakes-performer herself, she ticks all the boxes from a trading perspective we just have to be smart about the mating.

“We had her inspected and she’s just above 16 hands with a nice frame, plus she’s Danehill free so she’s easy to breed with and the plan is to put her back through the sales.

“I had to be patient with the bidding this afternoon – I even ate lunch in between bids – but I was determined to buy her.

“We’ve had success with mares purchased on Inglis Digital like Liveinthefastlane, who we paid $90,000 for last year and she’s since run third in the Provincial Championships to earn back her purchase price and then some.”

Street Icon was offered by Ken King Thoroughbreds, who also raced her half brother Bons Away having purchased the dam Villa Albani (Mossman) for just $2000 at the 2012 Inglis Great Southern Sale.

“What a result! While we’ve purchased off Inglis Digital before in order to improve our own broodmare band, but this is our first time as a vendor and to have her sell for more than one and a half times her reserve is fantastic,” King said.

“We had offers for her when she was racing and we knew there was strong interest this week with plenty of inspections.

“She was originally slated to sell at the 2021 Great Southern Sale, but we wanted to present her as quickly as possible with the breeding season looming and obviously now the decision to offer her on Inglis Digital has been vindicated.

“She has sold for more than she earned on the track and the best part is the family is still improving and we think there is more black type to come.

“It’s a great story, we bought the dam from Blue Gum Farm at the Great Southern Sale as we thought she was a nice match for Bon Hoffa and the resulting foal was Bons Away.

“A big thank you to the Inglis team who were most professional to deal with, we’re beyond thrilled with the result and it certainly won’t be the last time selling on Inglis Digital."

Five-time winning mare Malahide, by the in-form Shamus Award and closely related to Haut Brion Her, rounded out the top three with trainer/breeder Steve Tregea of Windemere Farm placing the winning bid of $320,000.

“I thought she was a beautiful mare, as soon as I opened her listing I fell in love with her,” Tregea said.

“It’s a current pedigree and the videos and photos of her were fantastic.

“Malahide reminds me of a mare called Miss Argyle (Igelsia) – who had a similar profile and we paid similar money for – she’s had 10 foals in a row for three Stakes winners and her 4YO gelding Incentivise (Shamus Award) ran third for me at Eagle Farm last Saturday, so I was spurred on by that.

“I always have a bit of a look at the mares in each Inglis Digital catalogue but I think this is my first purchase, it’s good fun being able to bid from the lounge room while watching the races at the same time!”

The June (Early) Online Sale posted a clearance rate of 80%.

*Ostracised – 2YO Divine Prophet gelding placed in all three starts – $80,000

Inglis Digital Business Manager Nick Melmeth said the platform has proven to be a viable option to trade top-quality breeding stock, especially at this time of year.

“Vendors are recognising the opportunity to leverage interest in stock by getting them into an auction scenario.

“Why sell privately when there is so much interest and activity being generated by the massive audience of buyers on Inglis Digital.

“We have a database of 8000 registered bidders and this sale has seen Inglis Digital surpass $120 million in turnover since 2018 and $34 million in 2021 alone,” Melmeth said.

To view the results or make an offer on a passed in lot, CLICK HERE.

The next Inglis Digital sale will be June 25-30, with entries closing at midnight on June 23.