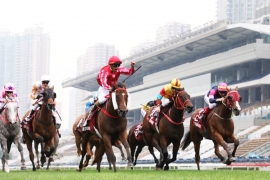 For 7YO Mr Stunning (Exceed And Excel) it was a dominant win in the Chairman’s Sprint Prize against Hong Kong’s best sprinters, to add to his G1 successes in the 2017 and 2018 Hong Kong International Sprint.

Mark and Shelley Treweek of Lyndhurst Farm identified Mr Stunning (pictured) as a weanling at the 2013 Great Southern Sale, where they purchased him for $110,000 from Makybe, who also bred the horse.

“I just liked him as a type, he wasn’t an overly big horse but he was a very good-walking colt,’’ Mark Treweek said.

“Being by Exceed And Excel was a big thing back then even, making him commercially attractive as well.

“Mr Stunning has been a great horse for a lot of people over the years and it’s been fantastic to have been involved in that journey and watching from afar.’’

It was a first Group 1 win and fourth Stakes success – in three different countries – for Southern Legend (Not A Single Doubt), who Carmel Size purchased in conjunction with her father Neville Begg – on behalf of owner Boniface Ho – for $280,000 at Inglis Easter from the horse's breeder Corumbene Stud.

“We had him here in Australia with Les [Bridge] at the start and won four races with him before he went to Hong Kong, he always had that ability,’’ Size said.

“I remember going to Easter with a budget of $300,000 and buying one horse for Hong Kong, and that’s a lot easier said than done.

“He was the first ‘Legend’ horse we ever bought. Mr Ho wanted to have the word ‘Southern’ in all of his horse names so this horse, being the first, became Southern Legend.’’

The buoyant night in HK capped off a big weekend of Stakes success for Inglis graduates.

In Sydney on Saturday talented colt Dawn Passage (Dawn Approach) made a one-act affair of the G3 Hawkesbury Guineas, scoring the easiest of wins in the 3YO feature at Rosehill.

It was a second Stakes win from his past six starts since finishing third in the inaugural $2m Inglis Millennium.

And Sweet Scandal (Sepoy) led in an Inglis graduates’ trifecta when winning the G3 Hawkesbury Crown.

It was a seventh career win for the 5YO mare, who defeated In Her Time – who was having her final race start and will be offered for sale at next month’s Chairman’s Sale - and Dyslexic.

At Flemington, the Pierro 3YO Sacramento gave trainers Waterhouse and Bott a state-to-state feature within 20 minutes when he won the Listed VRC St Leger soon after Dawn Passage’s Hawkesbury Guineas success.

Bred by Robert Crabtree, Sacramento – now a winner of 3 of his 12 starts - is a $160,000 Premier Yearling Sale buy for Paul Moroney Bloodstock, from Supreme Thoroughbreds.

And at Morphettville Dalasan (Dalakhani) made it back-to-back Stakes wins with a comfortable victory in the G3 Chairman’s Stakes and he may look to add a Group 1 to his resume in the South Australian Derby in a few weeks.

The win took Dalasan’s career earnings past the $2m mark, a spectacular feat for the talented 3YO.

Dalasan’s trainers Leon Macdonald and Andrew Gluyas purchased the horse for $80,000 at the Premier Yearling Sale, where he was offered by Mill Park Stud.