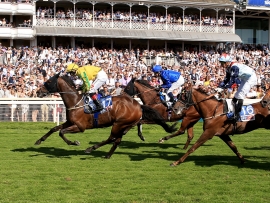 A 25% share in Caulfield and Melbourne Cup contender Mustajeer - a recent winner of the prestigious Ebor Handicap in the UK - will be offered through Inglis Digital’s Online Sale platform next Tuesday and Wednesday.

The exciting import, who arrived at Werribee last week, has been transferred to trainer Kris Lees in Australia and will race in the Australian Bloodstock colours.

Mustajeer, who is a G1 placegetter in Europe behind the champion Magical in this year’s Tattersalls Gold Cup and split leading European stayers Master of Reality and Southern France in the Vintage Crop Stakes in April, is currently rated $15 with TAB Fixed Odds for the Caulfield Cup and $18 for the Melbourne Cup.

Champion jockey Damien Oliver has been booked for the Caulfield Cup ride, for which the horse has been appointed 55.5kg.

Mustajeer (Medician) is a winner of four of his 19 starts and raced into Cups calculations with his impressive victory in the Ebor at York on August 24, when trained by leading Irish trainer Ger Lyons.

The Ebor Handicap has been a key lead up race for Caulfield and Melbourne Cup raiders, with four of the past five Ebor winners lining up on the first Tuesday in November.

Ebor winners that to have performed well in either the Cups during the past decade include Purple Moon (2nd in 2007 Melbourne Cup), All Too Good (1st in 2008 Caulfield Cup), Heartbreak City (2nd in 2016 Melbourne Cup) and Nakeeta (5th in 2017 Melbourne Cup).

This year’s Caulfield Cup is worth a record $5m while the Melbourne Cup prizemoney has been boosted again to $8m.

Mustajeer will be offered on behalf of Gaelic Bloodstock.

Mustajeer’s new trainer Kris Lees said it was a great thrill to be training the world-class galloper, who has settled in very well since arriving at Werribee.

“He’s a lovely looking horse that seems quite adaptable in his racing style, whether it’s forward or back, plus he’s performed on firm ground which he found in the Ebor and he beat home Prince of Arran who performed very well here previously, so I think he meets all the credentials,’’ Lees said.

“This is a fantastic opportunity to buy a share in a horse that’s about to race in the Caulfield and highly likely to progress into the Melbourne Cup.”

“He’ll go to Caulfield for a gallop probably the Tuesday before the Caulfield Cup, he’ll be stabled there that week to give him the best chance to familiarise himself with the surroundings and he’ll have a gallop there with Damien Oliver aboard.’’ Inglis Digital Business Manager Nick Melmeth said the sale was a coup for Online Auction platform.

“It’s also a great chance for someone to buy into a horse with Mustajeer’s profile – who is not only qualified for the Caulfield and Melbourne Cup – but is a live chance in both races,’’ Melmeth said.

Bidding on the 25% Mustajeer share will open 9am (AEDT) Tuesday, October 8 with Final Countdown commencing at 5pm (AEDT) Wednesday, October 9.

Terms and Conditions will be available on the listing.