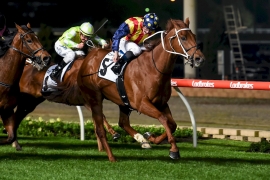 Nature Strip’s G1 Moir Stakes win and Shadow Hero announcing himself as one of Australia’s leading 3YOs have headlined another stellar weekend of performances by Inglis graduates.

Nature Strip (Nicconi) added a second G1 to his resume when proving too strong for his rivals in the 1000m sprint at The Valley.

The win again prompted talk of The Everest, the $14m sprint at Randwick in three weeks for which Nature Strip (pictured) remains a $15 chance with TAB.

“He was finicky as a foal and he’s still a bit like it as a matured racehorse but at the end of the day he’s a two-time Group 1 winner and has proven that when he’s right, he’s a bloody tough horse to get past.

“I’d love to see him get his chance in the Everest but if that’s not how things pan out, there are plenty of other options for him moving forward.’’

Nature Strip is one of 33 Inglis graduates to have won a G1 since the beginning of 2018.

Earlier on the program at The Valley, the Inglis Easter youngster Loving Gaby (I Am Invincible) – one of the nation’s leading 2YOs last season - proved she is in for a big 3YO spring campaign with a dominant first-up victory in the G3 Scarborough Stakes.

The Phoenix Thoroughbred-owned filly earned almost $600,000 for connections as a juvenile thanks largely to second placings in the G1 Inglis Sires and G1 Champagne Stakes, as well as a close-up fourth in the G1 Golden Slipper.

Bred by Kia Ora Stud and Alan Bell, the Ciaron Maher and David Eustace-trained Loving Gaby is a $500,000 Inglis Easter buy for Phoenix, from the Kia Ora draft.

Her dam Maastricht sold to Coolmore and James Bester Bloodstock at this year’s Inglis Chairman’s Sale for $2,250,000.

At Randwick today Shadow Hero announced himself a star in the making with a dominant 3.3 length win in the G3 Gloaming Stakes.

The $260,000 Classic Yearling Sale buy for Sweetbriar Equine from the Newgate Farm draft now appears to have successive G1 races at his mercy – he is a $2 favourite for the Spring Champions Stakes and a $2.50 TAB favourite for the Victoria Derby.

“It’s amazing, very amazing. I watched on television from here in Hong Kong and it’s very exciting for all of us,’’ Sweetbriar’s David Lui said.

“We found him at the Classic Sale and gave him to Mark Newnham straight away. He was scopey and had a good attitude and Mark told me earlier this year this horse is something special and now we are really seeing that.’’

For Mizzy – who trainer Anthony Cummings paid $200,000 for at Easter from Segenhoe Stud – it was a third consecutive Stakes win this campaign.

“She won today because she was so fit and she is so talented,’’ breeder Robert Crabtree said.

“When she won the Toy Show and Sheraco earlier this prep, [jockey] Tommy [Berry] was brilliant in getting those wins but today – as good as Tommy was again – Anthony had her absolutely primed and Mizzy did the rest.

“She’s a great mare and we’re having a lot of fun with her.’’

One race later Stampede led in an Inglis Easter quinella in the Colin Stephen, defeating Master of Arts.

Stampede, bred by Dodmark Thoroughbreds, will now likely back up in next weekend’s G1 The Metropolitan at Randwick.

Should he win that, it would take Stampede’s career prizemoney through the $1m barrier – he was an $80,000 yearling buy for co-trainer Gai Waterhouse, James Harron and Round Table Racing from Coolmore Stud.