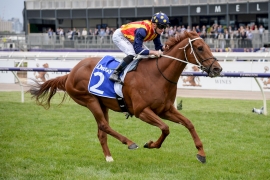 On another day of domination for Inglis graduates on both sides of the Tasman:

*Nature Strip (Nicconi) led in a trifecta of Inglis graduates in the VRC Sprint, defeating the brilliant 3YO Easter filly Loving Gaby, with Classic mare and Inglis’ Everest runner In Her Time back in third place

*Dame Giselle (I Am Invincible) firmed into a $13 TAB favourite for next year’s G1 Golden Slipper with her Golden Gift win, giving owner Sir Owen Glenn a great thrill as he watched trackside

Nature Strip (pictured) was sent to the lead by jockey James McDonald at Flemington and gave none of his rivals a chance, exploding away at the clock tower to score the easiest of G1 wins by 3.3L in a time of 1:09.23.

Nature Strip – who was offered at the 2016 Premier Yearling Sale by Sean Buckley’s Golden Grove, who also bred the horse – has now won 12 of his 20 starts.

Today’s win saw him crash through the $4m prizemoney barrier.

At his past six starts Nature Strip has won the G1 trifecta of The Galaxy, Moir Stakes and VRC Sprint.

It was a fourth consecutive win in the VRC Sprint Classic – the premier sprint race of the Melbourne Spring Carnival - for Inglis graduates following the success of Santa Ana Lane (2018), Redzel (2017) and Malaguerra (2016).

“People often say ‘why would they sell their good ones?’ but that’s what we do. We breed and raise very good horses and the owners of Nature Strip are seeing that first hand. Good luck to them.’’

At Rosehill, 2YO Dame Giselle announced herself as a filly of rare precocity and talent with a big win in the inaugural $1m Golden Gift.

Offered at this year’s Easter Yearling Sale by Sledmere Stud, Dame Giselle caught the eye of Sir Own Glenn’s Go Bloodstock, who purchased her for $500,000.

“This is just wonderful. She’s a beautiful filly,’’ Glenn said.

“She’s always had a lovely nature, soft, yet look at her guts, she’s tough. I wish they were all like that.’’

“The filly was born and raised at Sledmere but it’s a great result for China Horse Club who deserve all the success that comes their way,’’ Murphy said.

“This filly was extremely popular at Easter, she’s a lovely type, had a great action at Riverside when she was being paraded for the entire week basically and the attitude she showed as a yearling she’s obviously taken through to her racing career.’’

Connections will consider the $2m Inglis Millennium in February for Dame Giselle, as will trainers Ciaron Maher and David Eustace with the eye-catching fourth-place getter Cellsabeel.

Also at Rosehill, the Erinvale Investments-bred Reelem In Ruby (Pierro) kept her stunning career record intact with a comfortable win in the G2 Hot Danish Stakes.

In 10 career starts, Reelem In Ruby has never missed the quinella, with today’s being her 4th win, with six minor placings.

She is an Inglis pinhook – a $75,000 weanling buy for Peter Ford Thoroughbreds from John Kenneally’s Erinvale Thoroughbreds before Triple Crown bought her for $90,000 at the Premier Yearling Sale, where she was offered by Peter Butterss’ Mayfield Thoroughbreds.

In New Zealand, Sensei (Dream Ahead) resumed with a strong victory in the Listed Pegasus Stakes at Riccarton.

The 5YO was having his first run since finishing behind fellow Inglis graduate Booker in the G1 Oakleigh Plate in February.

Today’s was a sixth career win and second at Stakes level for Sensei, whose trainers Michael and Mathew Pitman purchased for $60,000 at the Easter Yearling Sale from Emirates Park.

Earlier in the day at Flemington Banquo (Written Tycoon x Noondie) made it consecutive wins with victory in the Listed Springtime Stakes.

Banquo’s dam Noondie sold to Mitchell Bloodstock for $600,000 at this year’s Inglis Chairman’s Sale, where she was offered by Sledmere Stud.